The Spirit of Samuel Smiles, the original self-help author, explores what self-help means in contemporary times. 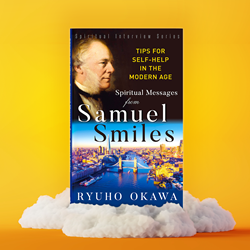 How can self-help principles best be applied in the modern age of technology?

“Spiritual Messages from Samuel Smiles: Tips for Self-Help in the Modern Age” is a new book written by World Teacher and Founder of Happy Science Group, Ryuho Okawa, that presents an archetypal dialogue with one of the original sources of the self-help movement. The term “self-help” itself originates in the book of the same name, first published in 1859 by Scottish author Samuel Smiles. Throughout the book, Ryuho Okawa mediates a communication from Samuel Smiles, in order that his original self-help principles could be explored in the context of contemporary life.

Much has changed in the world since 1859. Perhaps most notably is that human technologies have taken on an exponential growth in development. Technological developments have allowed human affairs to be conducted with greater ease and simplicity in many regards, particularly in their capacity to streamline otherwise tedious acts. However, Samuel Smiles, as is indicated in this work, indicates that there are certain factors which humanity should be mindful of in the midst of its perpetually increasing technological integration.

It is notable that while technologies in of themselves are with their merits, they are also with the tendency to develop in humanity a sense of reliance and dependency. An example given in the book is how, with the widespread usage of motor vehicles, humans do not experience the necessary physical exercise that they once did, and accordingly must determine a method of compensating for this or else enter an unhealthy state. It is not suggested in the book that humans cease from employing technologies, but rather that humans strive nonetheless to adapt alongside new technologies so as to maintain the capacity to help themselves by their own volition. Without adequate adaptation, humanity runs the risk of losing many of its own natural capabilities and entering into a state of total dependence upon external objects.

Happy Science is described within this work as being a unique religion; whereas most religions instruct their adherents to become entirely dependent upon their God, Happy Science teaches self-reliance and self-help. The earliest Buddhist teachings likewise emphasized what may be described as self-help, as all efforts toward enlightenment must be accomplished by the individual striving toward it. There is no reliance upon a higher being to save you in either Happy Science or Buddhism, and instead the efforts toward greater well-being must arise by willpower and self-discipline.

An important message in this work is the emphasis upon perpetual self-development. Just as technologies are always developing further, humanity should likewise always strive toward greater aspirations. Such is applicable to the individual, but also to entire nations; an independent individual or nation that strives always toward self-improvement is a free and liberated individual or nation.

It is easy to become comfortable and complacent when the first signs of success appear in one’s life, be it in one’s career, spiritual development, or any other area of life. The key, as is explained in this book, is to never be completely satisfied with one’s development, and to always strive forward and onto greater things. Sometimes, as was the case with Shakyamuni Buddha and Jesus, others will not understand the path that one takes.

One’s path may differ from what is expected by others, but this can be a wonderful indication of striving towards something that is able to impact the world on a grand scale. An example given in the book is that Jesus Christ likely trained as a carpenter under Joseph, but inevitably would have gone on to spend time in meditation and listening to the lectures of the spiritual teachers of his time, all with a spiritual mission that those around him would have never suspected. As is stated in the book, there are many hidden bodhisattvas and angels throughout the world, and such are the people who will often take a path that is not expected of them for the betterment of the world.

For those whom these ideas and principles sound appealing, the “Spiritual Messages from Samuel Smiles” provide a wealth of advice for both spiritual and material development in the modern age.

“Spiritual Messages from Samuel Smiles” is available at all major bookstores nationwide, including Barnes & Noble and Amazon.