Religion and spirituality are capable of addressing what the secular world cannot; namely, disturbances by malevolent spirits. 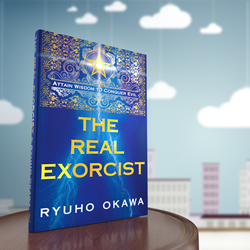 “The Real Exorcist – Attain Wisdom and Conquer Evil” is a new book written by World Teacher and Happy Science Founder Ryuho Okawa, is published concurrently with the movie of the same name, which explores the concepts outlined in the book visually and in practice (and scheduled to be released Summer 2020). The preface states a core truth as concerns exorcism: "Essentially, the right approach is to teach the Truth to each spirit and send each one back to Heaven." This seemingly simple foundational teaching, as is explored throughout “The Real Exorcist,” can sometimes be a very complicated matter, especially when considering the vast array of spirits that one may come into contact with.

Early in the book there is some criticism directed towards religions that claim personal salvation to be an easy and effortless path. Where a person believes that they are easily and automatically forgiven for their misgivings, without self-reflection and repentance, it is very easy for malevolent spirits to slip into their mind. Many spirits that are considered "evil" begin as lost souls who cannot find their way to Heaven in the afterlife. Okawa explains that when lost souls begin to cause harm to the living, it is this that causes them to become evil spirits.

The longer a spirit has been lost, and the more it has had a malevolent influence upon humans, the more complicated a process it is to guide the spirit to where it is meant to be. Lost souls who become evil spirits may even become devils who are situated in hell for vast lengths of time, and eventually come to identify with that wavelength to such a degree that it is very difficult to show them the path of truth.

Devils, being the leaders of legions of evil spirits, are prone to entering into possession with people who hold leadership positions in the world. Examples of past leaders under the influence of devils include Pol Pot, Adolf Hitler and Josef Stalin. It is ultimately stated that human desires are the source of why they may become devils; Okawa states, "Desires are where devils make their home". While desires cannot be completely eliminated, and are a part of human existence, they may be controlled and regulated in a balanced manner, as Happy Science teachings demonstrate; in fact, this is a major purpose of religions in general. Principles such as love for others and self-sacrifice are a key to aligning oneself with the wavelengths of angels, rather than lost souls or hellish spirits.

While Eastern religions teach the philosophy and practice of egolessness, the Western perspective generally maintains that a person is nothing without their ego; this is despite the fact that through egolessness a great power of self-sacrifice is possible. Okawa explains that the crucifixion of Jesus is with a very similar teaching to the egolessness teachings of Shakyamuni Buddha. The life of Jesus was one of self-sacrifice without compromise. Such was similar for Socrates, who could have escaped from prison, but willingly accepted his fate of punishment by death for speaking the truth.

Okawa explains that one frequent reason that devils enter into a person is due to their sense of worry and lack of problem-solving skills. This can be especially complicated for spiritually devoted people who simultaneously have families. The very practical advice provided is that when one feels overwhelmed by worries, it is important to take a step back and retreat from them so that a strategy may be formulated; this is an effective method for preventing oneself from attuning with hellish wavelengths of energy.

The "El Cantare Fight" method is explained in this work at length, and outlines a powerful method of exorcism. The method itself can be seen in action in the movie, “The Real Exorcist,” and the book examines it in great detail. In this and any practice of exorcism, it is explained that the power is mediated through the exorcist, rather than derivative from them as an individual. It is important that the spirit being exorcised be aware that the light which binds and expels them comes from God, so that they know it is God with whom they are battling, rather than the exorcist themselves. The "El Cantare Fight" is one of the most powerful spiritual rituals that Happy Science has ever published.

“The Real Exorcist,” aside from providing deep insight into the dynamics of the spirit world and its interaction with the material world, emphasizes the role and importance of religion as something of sacred importance. There are matters that secular society, despite its purported advancements and progress, remain unable to address, and which religion alone is capable of undertaking. This work is for those who understand that there is more happening in God's creation than meets the eye, and for those who wish to take a more active role in their spirituality.

“The Real Exorcist” is available at all major bookstores and online retailers nationwide, including Barnes & Noble and Amazon.