World Unite for Ukraine Announces Live, In-person Event on June 16, 2022, to Kick Off Campaign to Raise Relief Funds for Ukraine

World Unite for Ukraine's Brooklyn, N.Y. event on June 16, 2022, will feature live music and performances and a charity auction to support a month-long $10M fundraising campaign for the U.S.-Ukraine Foundation. 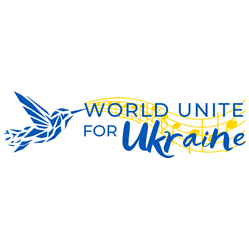 World Unite for Ukraine™, a global grassroots movement uniting millions of people around the world to support Ukrainians and ease the humanitarian crisis in Ukraine, today announced it will host World Unite for Ukraine Live!, an in-person, charity benefit event on June 16, 2022, from 6-11 p.m. ET. To be held at Emneu Venues, 84 14th Street in Brooklyn, N.Y., the ticketed event is open to the public and will feature live music and performances as well as a charity and art auction. It serves as a kickoff for World Unite for Ukraine’s month-long fundraising campaign, which aims to raise $10M for the U.S.-Ukraine Foundation (USUF) and will culminate in a globally streamed concert event on July 14, 2022.

The Brooklyn in-person event will feature performances by MASHA BRODSKAYA, a Grammy-nominated violinist, multidisciplinary multimedia artist, composer, producer; and Living Candelabras by Flambeaux, presented by Bright Futurism. There will also be an eyewitness account by Vincent Lyn, CEO of We Can Save Children, deputy ambassador to the International Human Rights Commission, Grammy artist and Carnegie Hall alumni. Charity auction items include ​​original paintings by artist Harrison Love, jewelry from Bimonte Sorrento, VIP tickets to a New York City FC game with jerseys, and additional raffle items from Chrysmela, VERB Haircare, BK Pilates, QOR360 and Mexico in My Pocket, among others. Food will be catered by Veselka. General admission is $50/ticket. Doors open at 6 p.m.

“We’re excited to kick off our World Unite for Ukraine fundraising campaign by hosting this event in the heart of Brooklyn. Since inception, our efforts have been one hundred percent focused on helping the Ukrainian people who have been impacted by the tragic events taking place within their country,” said Victoria Yampolsky, an American entrepreneur with roots in the former Soviet Union who conceived and co-founded World Unite for Ukraine. “We are thrilled to come together in-person, as a community, to make a positive impact in the lives of Ukrainians, with a memorable evening of entertainment and fun.”

“The outpouring of support from individuals and businesses of all sizes, industries and walks of life to make this live event a reality has been awe-inspiring," said Jessica DelVirginia, WUFU Live! event producer and founder of communications consultancy Insite Strategy. "We cannot wait to bring World Unite for Ukraine Live! to Brooklyn next week and unite everyone in support of a cause bigger than all of us.”

For more information about the June 16 event, go to http://bit.ly/worlduniteforukrainekickoff. Corporate sponsorships are also available.

World Unite for Ukraine’s July 14 streamed concert event will feature music by Pink Floyd, AJR, Pat McGee Band, Crash Test Dummies, Anti War Machine (featuring members of The B-52s and Public Enemy) and Resonant Alien (featuring members of Public Enemy, Tesla and Chic), among others. To be streamed on Mandolin to 25+ countries, the event will also include top artists, actors and celebrities, who will present messages of support and inspiration, along with powerful stories from Ukraine that will highlight the country’s history, culture and the devastating impact the war has had on Ukraine and its people.

World Unite for Ukraine’s charity partner, USUF, is a U.S.-based 501(c)(3) nonprofit organization working on the ground in Ukraine since 1991. USUF supports the development of democracy, a free-market economy and human rights in Ukraine while strengthening the bonds between America and Ukraine. Donations to World Unite for Ukraine’s campaign can be made before, during or after the concert event.

To access the July 14 streamed event and purchase tickets, visit https://boxoffice.mandolin.com/products/world-unite-for-ukraine. All ticket sales are tax-deductible donations to the U.S.-Ukraine Foundation.