Recent release “World War II at the Movies, Volume II” from Page Publishing author Virginia Lyman Lucas, is comprised of twenty-seven powerful movies organized by nine categories such as Commando Missions, Innovation, and POW Camps. This book offers a broad scope of major battles and turning-point events, honoring the heroes who fought on the front lines and the strategies of military leadership that contributed to and brought about the Allied victory of good over evil and freedom over oppression in World War II. 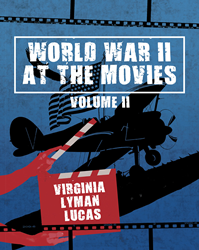 Virginia Lyman Lucas is a poet with a passion for dancing and the Greek language and longtime New Yorker who now resides in historic Fredricksburg, Virginia. She has completed her new book “World War II at the Movies, Volume II”: a list of film addressing a wide array of themes connected with America’s involvement in the Second World War.

As rich in history as “World War II at the Movies”, which commemorates in chronological order World War II major battles and pivotal events and captures the spirit of frontline heroes and strategist leaders, World War II at the Movies, Volume II, is as different in content and format. These compelling major motion picture films, blockbuster thrillers, and fascinating supplemental data elucidate and elaborate on top secret commando missions, challenges that wounded veterans faced adapting to civilian life with life-changing disabilities, and innovation, development, and advances in war weaponry technology, which led to the Allied victory over tyranny. Readers will find out:

Published by Page Publishing, Virginia Lyman Lucas’s engrossing book is a detailed commemoration of the films that brought the tragedy and heroism of World War II to life on the big screen.
Readers who wish to experience this engaging work can purchase “World War II at the Movies, Volume II” at bookstores everywhere, or online at the Apple iTunes store, Amazon, Google Play, or Barnes and Noble.