Experience What Really Happened at the Standing Rock Protests from the Front Lines with 360° Viewing. 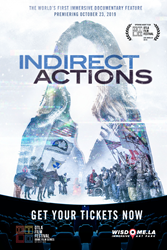 I'm proud to be pioneering this new cinematic journey where the audience lives in the consciousness of the storyteller’s memory and the dome becomes a sanctuary for this.

Experience 360°, Tower Films and Good To Go Media are proud to present the World Premiere of “Indirect Actions” from award-winning director Maranatha Hay and producer Ryan Moore. The project is the world’s first immersive documentary feature film and can be seen as part of the first-ever Dome Series at the Downtown LA Film Festival Opening Gala on Wednesday, October 23, 2019 at 6:30 pm at Wisdome Immersive Art Park (1147 Palmetto Street, Los Angeles).

Producer Ryan Moore says, “There is no other way to see this film, except for experiencing it in-person in a Dome venue. We are thrilled that the festival has chosen our film to be featured at the Opening Gala.”

Director Maranatha Hay says, "I’m thrilled to share this experience through a medium as powerful as the story. It's an epic saga on the Great Plains that is incredibly relevant in our time—on the biggest screen you've ever seen. As a female filmmaker, I'm proud to be pioneering this new cinematic journey where the audience lives in the consciousness of the storyteller’s memory and the dome becomes a sanctuary for this."

Step into the story and join a documentary filmmaker (Maranatha Hay) on a mission for justice at Standing Rock, where over 300 indigenous tribes stood together in solidarity against the Dakota Access Pipeline. She follows social media-driven outrage to the icy prairie of North Dakota—only to discover the dangers of a single-minded perspective and some surprising unintended consequences of Internet activism.

That time has arrived.

Moore adds, “Using the dome as a theatre creates a powerful medium for first-person storytelling. Rather than being confined to Virtual Reality head gear, viewers can experience the immersion together, headset-free, with 360° viewing in a dome-shaped screening venue.”

Director Maranatha Hay is five-time regional Emmy-award winning director and producer. She has directed six documentaries for television that have aired internationally on PBS and the World Channel on subjects such as the Ebola crisis in Sierra Leone and Liberia, the Angolan Civil War, and pediatric heart surgery for children in Nicaragua and Egypt.