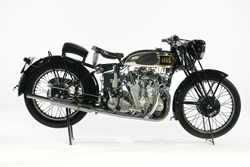 This legendary 1938 Vincent-HRD Series A Rapide is among the most coveted motorcycles in the world as both the original Vincent V-twin and the fastest motorcycle in the world in its day, knocking the Brough Superior SS100 off its perch.

This extremely rare prewar superbike is built from an original 1938 Rapide engine mated with an original 1939 frame, which has been correctly and beautifully restored by a renowned Vincent expert using OEM parts wherever possible. It’s a well-known machine in the Vincent Owner’s Club, one of 78 originally produced and the only one available at the moment, as few owners sell their prewar Rapides. They are the ultimate Vincent twin and among the most desirable motorcycles in the world.

The story of HRD-Vincent goes back to motorcycle racer-turned-manufacturer Howard R. Davies, who leveraged his racing success into a small motorcycle building business. Davies remains the only man to have won a Senior (500cc) Isle of Man TT on a 350cc (Junior) machine, riding for AJS in 1921. He built his own excellent sports machines from 1924, but quickly found himself in financial trouble and the H.R.D. brand was sold to a young Philip Vincent in 1928. Vincent’s father had made a fortune ranching beef in Argentina, and young Philip Vincent had ideas to incorporate rear springing for the chassis of motorcycles, which he patented, and had the opportunity to test with his own business. Calling his machines Vincent-HRD, he used JAP and Rudge engines in Vincent’s ugly duckling chassis design. It took Australian engineer Phil Irving to bring life and enduring fame to the Vincent-HRD company, designing a high-camshaft 500cc single-cylinder engine for the new Meteor and Comet models for 1934.

Within two years, the single was doubled up to become the 998cc V-twin Rapide model of 1936. It was the fastest production motorcycle in the world at the time with a 110 MPH top speed. The engine was the heart of the beast, and it was slightly let down by its choice of a Burman clutch and gearbox, but in truth only one British gearbox was designed to handle the 50 HP of the Rapide and it was owned by Norton at the time. Regardless, road testers and the few lucky owners were full of praise for the new Rapide, as it handled well and braked very well for the day, with two drum brakes on both the front and rear wheels—and, it went like a rocket.

This rare and most coveted motorcycle goes to Auction Friday April 30 at Mecum in Las Vegas. A once a decade opportunity to buy a majorly collectible, running, & museum quality Vincent Series A Rapide Twin. The link to the Mecum auction lot F183 for bidding is https://www.mecum.com/lots/LV0121-474902/1938-vincent-hrd-series-a-twin/