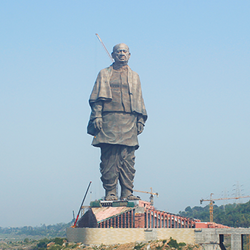 “This monumental statue will quickly become be recognized as a wonderful asset for the community and the country, " said Peter Davoren, president and chief executive officer of Turner Construction Company.

The Statue of Unity depicts India’s first Deputy Prime Minister, the freedom fighter Sardar Vallabhbhai Patel. Sardar Patel is known for his leadership during India’s struggle for independence, as well as his unifying power. He worked—and succeeded at—integrating more than 500 princely states to create a unified India. In doing so, he earned the nickname The Iron Man of India.

Turner International provided construction management services on the Statue, guiding the project throughout construction to the inauguration on October 31, 2018 which coincides with the 143rd anniversary of Sardar Patel’s birth. Jairam Panch, Turner's vice president and managing director for India said, “In a symbolic act to represent the unified nation, iron was gathered from across India and then melted and utilized in the project.”

Speaking to the sheer magnitude of the Statue and Turner’s undertaking, Jairam said, “For the exterior of the Statue, workers pieced together 553 macro bronze panels comprised of approximately 6,000 micro panels. The final bronze panel was installed on October 11, 2018.” He continued, “The choice of bronze cladding epitomizes the dignity and enduring values attributed to this important statesman, and the bronze will go through a natural aging process to develop a rich green patina over time.”

The Statue is designed to withstand winds reaching 180 km (112 miles) per hour as well as earthquakes measuring 6.5 on the Richter scale. It draws its strength from dual cylindrical concrete cores that rise up through the legs and torso of the figure, that are bolstered by 6,500 metric tons of structural steel and 18,500 metric tons of reinforcing steel bars. A tuned mass damper system provides additional stabilization.

Conceived as a naturalistic and historically accurate representation of Sardar Patel assuming a walking pose, the Statue rises above a geometric star-shaped platform built on Sadhu Island in the Narmada River. Visitors to the Statue of Unity arrive at a riverside visitor center and then proceed across a footbridge to the Statue’s base where an exhibition hall provides accounts of the life and accomplishments of Patel and the history of modern India. Draped over the roof of the exhibition hall is a contemplative Memorial Garden. Within the Statue’s chest, a 200 person gallery provides visitors with a wonderful view of the surrounding countryside and the nearby Sardar Sarovar Dam.

Peter Davoren, president and chief executive officer of Turner Construction Company said, “We are proud of the high caliber work that was completed by a world-class and multidisciplinary project team. This monumental statue will quickly become recognized as a wonderful asset for the community and the country. The statue will draw national and international tourists for generations to come.”

About Turner International
Turner International provides comprehensive management services through the development, design, and construction phases of general building projects. With regional operations in India, Southeast Asia, Europe, Latin America and the Caribbean, and the Middle East, Turner International currently manages more than US$50 billion of work, on projects totaling more than 40 million square meters. Turner International has worked in more than 60 countries on some of the world’s most complex and recognizable buildings, including Burj Khalifa and Taipei 101.

About Turner Construction Company
Turner is an international construction services company. Founded in 1902, Turner first made its mark on the industry pioneering the use of steel-reinforced concrete for general building, which enabled the company to deliver safer, stronger, and more efficient buildings to clients. The company continues to embrace emerging technologies and offers an increasingly diverse set of services. With an annual construction volume of US$11 billion, Turner is the largest builder in the United States, ranking first in the major market segments of the building construction field, including healthcare, education, sports, commercial, and green building. The firm is a subsidiary of HOCHTIEF, one of the world’s leading international construction service providers. For more information please visit http://www.turnerconstruction.com.