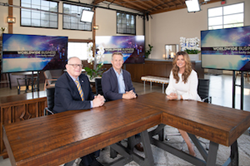 NGA 911, a Next Generation 911 (NG9-1-1) provider headquartered in Beverly Hills, California, provides a new solution for emergency calls worldwide. In a world where landline communications are becoming increasingly obsolete, and other communication apps are replacing texting, it's crucial to provide 911 access from devices familiar and comfortable to the public. NG 9-1-1 provides better location, Real Time Texting, and enhanced data to allow for more effective 911 call handling and ultimately faster and better emergency response. With affordable, quick implementation solutions and training, NGA 911's Next Generation technology helps save lives.

Whitmer says that there are many problems associated with the current emergency dialing system, but NGA 911 has a solution. He explains, "When someone needs to call 911, it is probably one of the most traumatic experiences of their life. The 911 system that's in place today was installed and developed in the early 1970s. Mobile phones and smartwatches were a thing of science fiction. We didn't have them, and we never anticipated that we would have them. Today, we have approximately 240 million 911 calls every year. Of those, 75 to 85 percent are wireless calls. Because of this old system, we don't know where you are when you call 911 from that network. We need a next-generation 911 system to allow us to integrate all of the new technologies that are available to us when we use a smartphone. We can get an Uber. We can get a pizza. They know where we are. But 911 doesn't know where we are. NGA 911 has developed an advanced, Next Generation 911 solution to work with other industry partners to resolve those issues and bring true 911 to the public that needs it when they need it."
For more information about NGA 911, visit NGA911.com and tune in to Fox Business Network as sponsored content on Sunday, October 20, 2019 at 5:30pm EST.