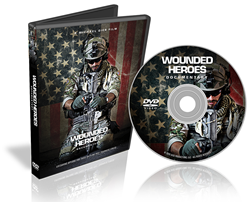 Our veterans deserve so much more than just a band-aid and that is what inspired me to create this film.

In the Wounded Heroes Documentary due out March 5th, 2021, PTS sufferers are finally getting their voices heard as they speak out about their mistreatment by the healthcare system, the medications that are making them worse, and the life-saving new proven therapies that are giving them back their lives.

An alarming statistic by the Department of Veterans Affairs report anywhere from 17 to 22 veteran suicides every single day.

Many feel it does not need to be that way.

After learning about this statistic and the serious side effects of overmedicating veterans, California filmmaker, Michael Gier, went on a mission to find successful alternative non-drug treatments that restore lives from the destruction of PTS.

“Post-Traumatic Stress among our veterans is a serious problem,” said Gier. “Most are given prescription medications, or drug cocktails as many call them, some of these prescriptions are black labeled with serious side effects.”

Gier, who traveled all over the country interviewing veterans, military brass, politicians, doctors, and other experts, said many veterans feel medication is just a band-aid over a wound that will never heal.

“Our veterans deserve so much more than just a band-aid and that is what inspired me to create this film,” said Gier.

Wounded Heroes Documentary is a 3-year passion project, funded primarily by Michael Gier and his wife Terri Gier, and features life changing options that give those suffering from PTS hope, potentially saving lives.

“These men and women served our country for years and the best we can do is give them drugs; some as many as eighteen different prescriptions, forty pills a day?!” said Gier. “I knew there had to be better options.”

In the film, Gier interviews health care professionals who are using alternative therapies that have been successfully proven to dramatically decrease their patients' medication or help them become completely PTS prescription free.

Gier said by creating the film he wanted to bring as much awareness as possible about these life changing treatments and that everyone suffering from PTS needed to know there were other options out there for them.

“These aren’t just therapies that can help our soldiers and veterans,” said Gier. “Firefighters, police officers, and first responders all deal with PTS, and even more people from all walks of life are being affected by Covid-19. These can benefit them too.”

Veterans reported the alternative treatments helped change their lives significantly for the better and went from contemplating suicide to finding happiness and gratitude in their daily lives.

“I didn’t even know this kind of happiness was possible.” - Sherri Waters, US Army

Dr. Shauna Springer, Ph.D., known as “Doc Springer” in the military community, is one of the nation's leading experts on trauma, military transition, and close relationships. She has become a trusted Doc to countless warfighters across the country and has gained the respect of warriors of all ranks. Her unique role has given her a deep understanding of warrior culture, and the warfighter.

Dr. Springer is a proud advocate of the film.

“The feeling that Post-Traumatic Stress is a “life sentence” is killing warriors – and people across America. Many have given up, but they need to know that there is life beyond trauma – not just survival, but a good life – a connected, emotionally fulfilling life. Wounded Heroes presents this life changing story of hope,” said Dr. Springer.

The Wounded Heroes Documentary will be available for streaming across multiple platforms including Amazon, iTunes, Google, and more starting March 5th, 2021.

Visit http://www.woundedheroesdocumentary.com to learn more and join the grassroots effort to help spread the word and impact countless lives.

The Wounded Heroes Documentary is the passion project of producer and director Michael Gier of Gier Productions, LLC. To date, he’s produced and directed hundreds of TV commercials, corporate video projects, and short and feature films. This is his first documentary.

An estimated 13 million Americans have PTS at any given time. - Sidran Institute (Traumatic Stress Education & Advocacy)