Laura Fanning and Madeline Baars are the winners of the 23rd annual Tom Howard/John H. Reid Fiction & Essay Contest sponsored by Winning Writers. The 2015 contest awarded $4,000 in prizes for the best original short stories, essays, and other short prose, including top prizes of $1,500 apiece for fiction and nonfiction. 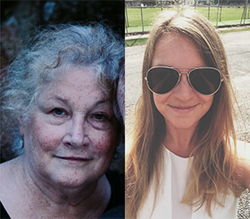 In defiance of fate, numerous mothers are naming their sons after Trayvon Martin to signify that black lives matter.

Winning Writers is pleased to announce the results from its 23rd annual Tom Howard/John H. Reid Fiction & Essay Contest. Laura Fanning of Alameda, California won first prize in fiction and $1,500 for her story, "The Brick". Madeline Baars of Portland, Oregon won first prize in nonfiction and $1,500 for her essay, "Trayvon". 927 authors from around the world submitted 1,195 entries.

The 23rd contest was judged by Arthur Powers, author of A Hero for the People (Press 53, 2013), with preliminary judging by Lauren Singer.

Fanning's poignant yet humorous story of a mother-daughter relationship explores the place of self-care and contemplation in a life of service. An elderly left-wing activist and tireless extrovert undergoes a personality change when a brick hits her in the head at a political demonstration. The narrator feels excluded and confused by her mother's new passion for solitary trips to art museums, until she sees how it fits in to the life lessons that the older woman has learned.

Contest judge Arthur Powers said, "An amusing story, it has substantial philosophical undertones, with thoughts on art that Thomas Merton would have appreciated."

Baars' fiercely compassionate, heart-rending essay arises from her work at a clinic for low-income families, where racism, violence, dangerous housing, and failing schools conspire to doom many children to short and unhealthy lives. In defiance of fate, numerous mothers there are naming their sons after Trayvon Martin—an unarmed black teenager killed in a highly publicized racial incident in 2012—to signify that black lives matter.

Powers called this essay "a hard-hitting, heartfelt piece about life and death in a poverty-ridden New Orleans neighborhood. Baars brings to it the passion of a clinic worker who walks and works with the local people daily."

$4,000 was awarded in all. Read the winning entries and the judge's comments.

About the Tom Howard/John H. Reid Fiction & Essay Contest:
The Tom Howard/John H. Reid Fiction & Essay Contest, sponsored by Winning Writers, is the successor to the Tom Howard/John H. Reid Short Story Contest formerly sponsored by Tom Howard Books. The contest accepts short stories, essays, and other short works of prose. All styles and themes are welcome. Both published and unpublished work are accepted. $4,000 will be awarded, and there is a fee of $18 per entry. Fiction and nonfiction will be judged separately. The top entries in each category will receive $1,500. Entries to the 24th contest are accepted online now through April 30, 2016. For guidelines, please visit https://www.winningwriters.com/tomstory .

The 24th contest will be judged by Arthur Powers, who went to Brazil in 1969 as a Peace Corps Volunteer and lived most of his adult life there. Mr. Powers is the author of A Hero for the People (Press 53, 2013)—a collection of short stories set in Brazil—and The Book of Jotham (Tuscany Press), which won the 2012 Tuscany Press Novella Award. He has received a Fellowship in Fiction from the Massachusetts Artists Foundation, three annual awards for short fiction from the Catholic Press Association, and second prize in the 2008 Tom Howard/John H. Reid Short Story Contest for "The Bridge". He is the contemporary editor of CatholicFiction.net.

About the Contest Sponsor
Winning Writers was founded in 2001 to provide expert literary contest information and resources to the public. In addition to the Tom Howard/John H. Reid Fiction & Essay Contest, we sponsor the Tom Howard/Margaret Reid Poetry Contest, the Wergle Flomp Humor Poetry Contest (no fee), and the North Street Book Prize for self-published books. Winning Writers is one of "101 Best Websites for Writers" (Writer's Digest). Learn more at WinningWriters.com and join our 53,000 followers on Twitter at @winningwriters.

Laura Fanning of Alameda, California won first prize for her story, "The Brick"

Winning Writers is one of the 101 Best Websites for Writers (Writer's Digest, 2015)