The inaugural WV Coalfields Cookoff WV State BBQ and ATV Festival, June 11 & 12th, 2021 in Welch, WV. The festival, hosted by the City of Welch, will feature the WV State BBQ Championships sanctioned by the Kansas City BBQ Society (KCBS) for pro pitmasters and backyard BBQ teams, as well as live music on Friday and Saturday night from Dale Ann Bradley and The Georgia Thunderbolts. We will also have a battle of the bands, sponsored by Bonfire Recording Studio and Pinecastle Music that offers cash prizes, studio recording time, and travel accommodations and label consideration with Pinecastle Music. 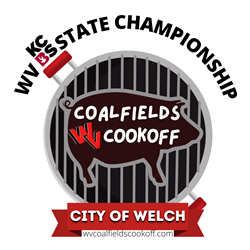 The WV Coalfields Cookoff will be held in downtown Welch, WV June 11-12. It's an official WV State BBQ Championship sanctioned by the Kansas City BBQ Society.

The inaugural WV Coalfields Cookoff WV State BBQ and ATV Festival, June 11 & 12th, 2021 in Welch, WV. The festival, hosted by the City of Welch, will feature the WV State BBQ Championships sanctioned by the Kansas City BBQ Society (KCBS) for pro pitmasters and backyard BBQ teams, as well as live music on Friday and Saturday night, including a battle of the bands, sponsored by Bonfire Recording Studio and Pinecastle Music that offers cash prizes, studio recording time, and travel accommodations. The wining group will also receive consideration with Pinecastle Music for a label release.

Other events include family activities, a beer garden, a public BBQ tasting, kids’ activities, and an ATV show with prizes for the best “ride”, as well as the opportunity to sit in the driver’s seat and take photos in the NASCAR Tribute Racecar representing the US Army on Saturday, June 12. The car, donated by Jeff Adkins and Rick Ware Racing participated in the NASCAR Cup Series Coca-Cola 600 at Charlotte Motor Speedway Memorial Day Weekend.

Friday and Saturday night will include main stage musical performances. The Georgia Thunderbolts, an up-and-coming southern rock band will take the stage at 8:00pm on Friday night and Grammy nominated, bluegrass legend, Dale Ann Bradley will perform at 6:30 on Saturday night. Opening for both bands are local musical favorites, Alan “Cathead” Johnson and Stacy Grubb.

Hailing from Rome, GA at the foothills of the Appalachian Mountains, The Georgia Thunderbolts recently released their latest song, “Take It Slow”, showcases their scorching signature style steeped in soulful southern swagger, blistering blues, and raw rock. Their the quintet’s self-titled debut EP on Mascot Records conjures a tried-and-true spirit through a fresh fire.

“In Georgia, you hear Lynyrd Skynyrd, The Allman Brothers, and all of the greats everywhere,” guitarists Riley and Logan add. “Rock and roll is something that comes naturally for us. We feel like we can bring it back.” The press agree, with Classic Rock Magazine dubbing the band “your new favorite southern rock band,” and American Songwriter calling their recently released debut EP, “timeless.” “But these Thunderbolts aren’t a low-voltage knockoff of the greats who came before,” Rolling Stone adds. “Rather, they keep things fresh by committing to lean, muscular songs…Southern rock continues to thrive in the 21st century.” More information can be found at http://www.georgiathunderbolts.com.

Dale Ann Bradley has always expressed in her recordings the boundlessness of bluegrass music and its musicians and vocalists by incorporating songs from all styles into her shows and albums. The success of her formula is undeniable, as evidenced by two Grammy nominations, an induction into the Kentucky Hall of Fame, and five IBMA Awards for Best Female Vocalist.

”Bluegrass can go anywhere, do anything, rip your heart out and make you laugh,” she says. In 2020, Bradley departed her critically acclaimed band, Sister Sadie, to refocus on her solo work with her new band MoonRunner, featuring Kim Fox on guitar and background vocals, Matt Leadbetter on dobro, Mike Sumner on banjo, and Ethan Burkhardt on bass. Her first album with the new lineup, Things She Couldn’t Get Over, will be released in early 2021. The first single from the album, “Falling Down,” is out now on Pinecastle Records. More information can be found at http://www.daleannbradley.com.

City of Welch mayor, Harold McBride, Sr. says the event has been carefully curated to attract many kinds of tourist and fill the lodging establishments in McDowell County.

“The WV Coalfields Cookoff will attract BBQ cookers, ATV enthusiasts, and outdoor tourists to visit the great city of Welch, WV,” said Harold McBride, Sr. Mayor. “In addition to the professional and backyard BBQ cook-off, there will be music contests, arts and crafts, food vendors, the Beer Garden for our guests age 21 and older, and the Kids Korner for our younger audience, we really have something for everyone at this event. With our surrounding mountains being home to the Hatfield McCoy Trail and Welch welcoming off-road machines into the city, we expect the event to be popular with our ATV tourists also and we are creating some contests geared specifically to them. The location also offers easy access to return to the off-road trails surrounding the town,” he continued.

Tickets, contest registration, and more details are available at http://www.wvcoalfieldscookoff.com or at the city offices located at 88 Howard Street in Welch. Festival passes are $5 per person in advance, can be purchased online and include tickets for the public BBQ tasting. A portion of the proceeds from the event will benefit the Welch, WV Volunteer Fire Department. Children ages 12 and under are admitted free with an adult. Tickets at the gate are $10 and include barbeque tastings.

MEDIA INFORMATION: For additional information, images, or interview requests, contact Andrea Ball, festival organizer at 301.335.2715 (call/text). Visit http://www.coalfieldscookoff.com for additional information about the event. The event will be held Friday June 11 and Saturday, June 12 and is hosted by the City of Welch, WV, media, and bloggers interested in attending can receive a complimentary press passes on request. Facebook @wvcoalfieldscookoff Suggested Hashtags: #KCBS #BBQ #CoalfieldsCookoff