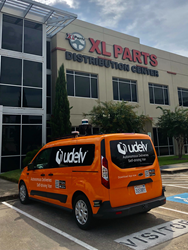 “This extension of our existing agreement with XL Parts is a testament to the remarkable technological achievements of Udelv’s teams to advance the first true business application of autonomous vehicles, and it rewards the progress made in the field, in real world situations”, says Daniel Laury, Udelv’s CEO. “We are thankful to XL Parts to have given us the opportunity to make such progress.”

Despite the Coronavirus pandemic, Udelv has managed to improve its technology comprised of an autonomous driver assisted with a state-of-the-art integrated ultra-low latency tele-operation system and the world’s first feature-complete back-end delivery management system. The advanced delivery robotics technology is designed to enable the removal of the human factor in point-to-point deliveries before expanding to larger adjacent areas.

The system has shown a remarkable ability to operate deliveries on a pre-set public road between two XL Parts-owned stores where autonomy and parking lot maneuvers are assisted with a robust tele-operation system located thousands of miles away from the field operation. The tele-operation meshes multiple sensor signals to augment camera views and relies on a series of modems for redundancy and packet distribution for ultra-low latency. The integration allows for major improvements in system reliability as well as early detection of situations that require intervention, resulting in 4x gains in miles per disengagement and overall safety and operability.

Autonomy itself relies on a series of sensors that include Velodyne LiDARs, cameras, Continental radars, Novatel GPS/IMU and a powerful computing system comprised of NVIDIA GPUs and Intel CPUs capable of processing over 22 TFLOPS.

“We placed our trust in Udelv’s technology when they reached out to us over a year ago and through our pilot project have been impressed with their ability to deliver, both literally and figuratively. Their team is highly dedicated and has continued to show steady progress. Recent events have driven increased demand for contactless delivery. XL Parts is committed to expanding its partnership with Udelv to allow us to advance our business and provide the highest quality of service at the lowest possible cost for our customers.”

With accelerated demand for home deliveries during COVID-19, and a serious shortage of drivers in sight, Udelv is witnessing a growing pent-up demand for driverless last- and middle-mile vehicles. Retailers, distributors and logistics companies increasingly see ADVs as the main solution for keeping delivery costs in check over the next decade and are eager to get started with Udelv to experiment with the only feature-complete solution available on the market at this point.

About Udelv: We Enable E-Commerce

On a mission to improve people’s lives, make roads safer and delivery a sustainable industry, Udelv is revolutionizing transportation with its Autonomous Delivery Vans (ADV), built specifically for last and middle-mile delivery on public roads. Founded in California in late 2016 by Daniel Laury and Akshat Patel, Udelv is on a mission to reinvent delivery and shape the future of autonomous driving.

In January 2018, Udelv successfully accomplished the first ever autonomous delivery on public roads. Udelv has since completed over 20,000 deliveries for multiple merchants in CA, AZ and TX and is planning for expansion in other states.