Xlibris informs of the publication of ‘Soraya: The Other Princess’ 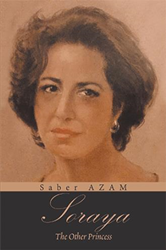 Saber Azam (saberazam.com) has authored a moving and informative book about Afghanistan. “Soraya: The Other Princess” (published by Xlibris) is a heart touching recollection of what transpired in Afghanistan in the past seven decades. This historical fiction is inspired by the life of an exceptional woman, Soraya Ludin who was the only woman of her country to study at, and graduate from the University of London in the 1960s. It attempts to portray how women were and are perceived and treated by their still tribal societies. Through pages of “Soraya: The Other Princess,” the reader is captured by an amazing evolution that engulfed a peaceful country and its remarkable peoples into repeated tragedies. Azam strives to over fly unfairness of cultural barriers, the existence of discrimination in Afghanistan, ravages of war that left indelible scares in the hearts and minds of peoples as well as mischiefs of “international politics” with uncalculated consequences on the lives of all and future generations.

He specifically highlights the mediocrity of Afghan leaders in meeting the challenges of a multi-ethnic society and their incapacity of handling national issues and international affairs in a manner that would ensure their country’s path to peace and progress. Within this context, Azam concentrates on the long and arduous efforts of Afghan women to play a positive role in their country’s advancement. He also gives a realistic perspective of the role played by colonial British power and by today’s super and regional players in the conflicts that have plagued the country with unending calamities. In writing the book, Azam also calls for world leaders to own moral responsibility by bringing peace and security to the war-ravaged country.

“Soraya: The Other Princess” depicts the joy, disappointment and sorrow of the Afghan populations. It also throws light on the misdeeds of invaders whose armies entered the country either for conquest or as feigned allies, promising good governance and democracy as well as on the emergence of modern terrorism, which has afflicted the world.

Through this fascinating book, Azam pays tribute to all Afghan female population for the prejudice they suffer from and their incomparable resilience. For more details about the book, please visit https://www.amazon.com/Soraya-Other-Princess-Saber-Azam/dp/1984563467.

About the Author
Saber Azam is a native of Afghanistan who at the age of 22 arrived in Switzerland to study at the École Polytechnique Fédérale de Lausanne where he obtained a bachelor’s degree in mechanical engineering and a doctorate degree in advanced nuclear technology. Following the invasion of Afghanistan by the Soviet Union, he turned into an advocate for mobilizing support for the Afghan Resistance, refugees and internally displaced persons while pursuing his academic endeavors. He also presided over the "Comité Afghan d'Aide Humanitaire" and engaged in promoting the involvement of Swiss public and private sectors in reconstructing war-torn countries. In 1994, he joined the United Nations High Commissioner for Refugees and served in Côte d’Ivoire and Kenya before becoming the deputy special envoy for South East Europe. In 2001, he moved to the United Nations Department for Peace Keeping Operations and assumed senior functions in the Office of the Special Representative of the Secretary-General for Kosovo. In 2006, he returned to UNHCR and served as representative of the organization in Côte d’Ivoire, Bangladesh and Rwanda as well as regional representative and coordinator for Central Asia. He has deep knowledge of world’s affairs, particularly Southwest and Central Asia, the Balkans, West and East Africa, the Rohingya situation and the Great Lakes Region of Africa.