Author’s book written to inspire readers to seek Him and spiritual growth. 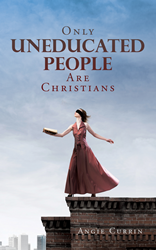 This book was written for readers to explore new places in life and to help revisit those roads they have traveled before but where they’ve missed important clues from Him.

Only Uneducated People Are Christians highlights twenty ways we receive wisdom and knowledge through Jesus Christ. His love travels down multi-faceted avenues of our lives, often going unnoticed. This book was written for readers to explore new places in life and to help revisit those roads they have traveled before but where they’ve missed important clues from Him.

Author Angie Currin was inspired to write this after meeting a non-believer when traveling abroad. After spending hours discussing literature, music, politics, cultures, and more, the man told her that was surprised that she was a Christian, because he believed that only uneducated people were Christians. She decided that day to write a book highlighting the multiple ways we receive our wisdom through Him.

Born in Georgia, Angie Currin is a wife, mother, and retired schoolteacher of 30 years. She was a student advisor, held a national position in Washington, and traveled the country: advising middle and high school students. She spoke at district, state, and national workshops and conferences. As a recognized leader, Angie won numerous awards in excellence in leadership. After retirement, she used her skills as a national leader bringing others to Christ. She now travels the world, sharing the Gospel, and is a storyteller at heart, bringing each chapter into a beautiful mosaic of her life.

Xulon Press, a division of Salem Media Group, is the world’s largest Christian self-publisher, with more than 12,000 titles published to date. Only Uneducated People Are Christians is available online through xulonpress.com/bookstore, amazon.com, and barnesandnoble.com.