Music lovers may own a Yamaha piano as a piece of opera history and a collector's item. 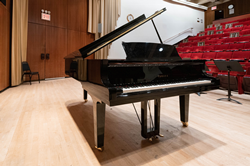 One of the Metropolitan Opera's Yamaha pianos in a performance space at the Met in Manhattan.

“It’s very gratifying for Yamaha to play such an important role in the artistic development of a cultural giant like the Metropolitan Opera,” said Dan Rodowicz, senior director of institutional sales, Yamaha Corporation of America.

The entire inventory of Yamaha pianos used this past season at the Metropolitan Opera (“the Met”) will be presented to the general public for purchase as collector’s items, opening up a golden opportunity for musical and cultural history enthusiasts to own a genuine piece of world opera history.

These expertly crafted, meticulously maintained instruments will be on display at the Met from Thursday through Saturday, September 12-14 by appointment and open to the public on Sunday, September 15.

This tradition has become part of a partnership between the Met and Yamaha that goes back more than three decades, when Yamaha first became the official piano of the Metropolitan Opera Association in 1988. Each of the pianos will be decorated with an engraved brass medallion marking it as a veteran of the Metropolitan Opera House and bearing a unique identification number.

The Yamaha pianos at the Met are used in many different contexts: in vocal and dance rehearsals, in the studios and the offices of the director and assistant directors, in the library, in auditions and, of course, in live performance. A Yamaha concert or semi-concert grand piano is played in the orchestra pit for all operatic performances at Lincoln Center. These instruments have been used for productions featuring opera luminaries such as Anna Netrebko, Sondra Radvanovsky, Christine Goerke, Roberto Alagna, Vittorio Grigolo and Joseph Calleja.

Yamaha technicians based in New York have long worked in close collaboration with Met technicians since the inception of the relationship, allowing Yamaha to gain further insight into proper piano voicing for operatic use, and enhanced product development and refinement for performing arts companies. Outside of New York, Yamaha historically has also provided pianos for use by the Met for performances and auditions on three continents.

“As the exclusive piano supplier to the Metropolitan Opera, it’s very gratifying for Yamaha to play such an important role in the artistic development of a cultural giant like the Metropolitan Opera,” said Dan Rodowicz, senior director of institutional sales, Yamaha Corporation of America. “It’s an added bonus that opera lovers and other music aficionados have the opportunity to preserve a piece of opera history by owning one of these finely crafted instruments.”

The pianos will be on display for sale at the Metropolitan Opera House at Lincoln Center from Thursday to Sunday, September 12-15; the display will be open to visitors by appointment for the first three days and open to the public from 12:00 noon to 5:00 p.m. during the final day.

For more information on the Metropolitan Opera, visit http://www.metopera.org

For more information on Yamaha Corporation of America, visit usa.yamaha.com