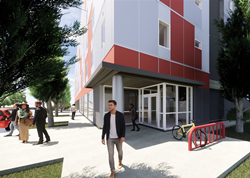 TCAD continues to partner with businesses and the community to ensure Ithaca's long-term prosperity. Shown is a rendering of Ithaca Arthaus, a development that will feature 124 affordable units.

“Our organization continues to partner with businesses and the Greater Ithaca community, ensuring Tompkins County remains a thriving destination to work and live," said Heather McDaniel, president of TCAD.

“We’re pursuing various avenues toward long-term economic success, and in 2019 that has included supporting local manufacturers and tech businesses, while delivering affordable housing and harnessing the power of renewable energy,” said Heather McDaniel, president of TCAD. “Our organization continues to partner with businesses and the Greater Ithaca community, ensuring Tompkins County remains a thriving destination to work and live.”

Working in high-growth areas such as food manufacturing, technology, residential development, renewable energy and tourism, TCAD managed a range of projects in 2019, from loan funds to burgeoning manufacturers, to incentives for technology research and development (R&D).

In 2019, to support the expansion of coconut-based cookie manufacturer Emmy’s Organics to a new location in Dryden N.Y., TCAD delivered a $150,000 loan. Combined with financing by Tompkins Trust Company and the Southern Tier Regional Economic Development Corporation, this loan enabled the $2.3 million project to proceed. As such, Emmy’s was able to bring back in-house production, a portion of which had shifted to an out-of-state co-packer.

TCAD’s activity within Ithaca’s growing tech corridor has capitalized on the region’s world-renowned higher education institutions. In 2019, the Industrial Development Agency (IDA), which is administered by TCAD, approved a sales tax incentive for the renovation of an existing building in the Cornell Business and Technology Park. This renovation will accommodate the R&D arm of Advion, a technology company founded in Ithaca in 1993, as well as two renewable energy startup companies, Conamix and Ecolectro. The renovation includes a lab and dry room space, which will allow these companies to establish facilities in the area after “graduating” from Cornell’s business incubator.

The organization has also served as an advocate for additional affordable housing units in the region, including Ithaca Arthaus, a proposed $28.7 million development at 130 Cherry St. Arthaus will have 124 affordable units, including 40 that will support at-risk youth (including those formerly in foster care or homeless), and an 8,800-square-foot amenity space. Further, a $1.7 million project at 327 W. Seneca St. will bring another 12 affordable units to Ithaca.

To support the region’s tourism efforts, TCAD delivered a loan to Dutch Harvest Farm in Lansing, N.Y., a luxury wedding and event space. The loan will help make the space a popular tourist destination, accommodating 300-plus people and becoming one of the most sought-after locations in the county.

“Tompkins County is thrilled to work with TCAD, which brings together entrepreneurs, executive teams, developers, and local and state officials to support sustainable development in the Ithaca region,” said Martha Robertson, chair of the Tompkins County Legislature. “The organization adds immense value to the community via direct business services, long-lasting partnerships and its unwavering focus on the region’s growing economy.”

TCAD has nurtured emerging businesses since 1964, building relationships with founders, educating the commercial brokerage community and sponsoring entrepreneurial meetups including its quarterly meetings of local economic development partners. TCAD develops and implements the county-wide Economic Development Strategy, most recently updated in 2019. For more information about TCAD’s initiatives, head to: http://www.tcad.org.

About Tompkins County Area Development
Since 1964, Tompkins County Area Development (TCAD) has continued to work tirelessly to grow, retain and attract companies that provide high-quality employment opportunities in the Greater Ithaca, N.Y., region. The organization strives to create a supportive environment for entrepreneurship and business development. TCAD maintains strategic partnerships with businesses, Cornell University, Ithaca College, Tompkins Cortland Community College (TC3), government and area nonprofits, which contributes to the region’s prosperity. TCAD is committed to its mission of creating a thriving and sustainable economy for its region. For more information, visit TCAD at: http://www.tcad.org.

To support the expansion of cookie manufacturer Emmy’s Organics to a new location in Dryden N.Y., TCAD delivered a $150,000 loan. Shown are Emmy's owners Ian Gaffney and Samantha Abrams.Photo courtesy of TCAD.

Shown is a rendering of the proposed Ithaca Arthaus development.Photo courtesy of BW Architecture and Engineering/Vecino Group.

A rendering of the proposed Ithaca Arthaus development at 130 Cherry St.Photo courtesy of BW Architecture and Engineering/Vecino Group.

The site of the future Dutch Harvest farm. TCAD delivered a loan to Dutch Harvest, which will help the venue become one of the county's top event destinations.Photo courtesy of TCAD.