Induction ceremony will be held Saturday, January 25, 2020, at 5 p.m. at the Downtown YMCA on North Market Street in Frederick 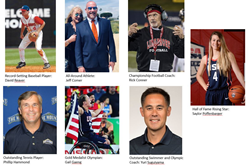 Six new inductees will be recognized:

Record-Setting Baseball Player
David Reaver was a four-year starting shortstop for the Linganore Lancers baseball team, led his team to Central Maryland Conference titles in 1998 and 1999, and was selected as first team All-CMC and All-Area, while compiling a .587 batting average. At the University of Richmond, David was a four-year starter, winning the Atlantic 10 regular season championships in 2002 and 2003 and the Atlantic 10 Tournament Championship in 2003. In 2002, the baseball team won the most games in school history, going 53–13, and the team was inducted into the University of Richmond Hall of Fame. David set the school record for consecutive games hit streak at 34, holds the all-time University of Richmond and Atlantic 10 Conference single-season hits record with 104 and 30 doubles. In 2003, David was selected by the New York Mets in the 10th round of the MLB draft. He played three seasons in the Mets organization with the Brooklyn Cyclones, the Port St. Lucie Mets, and the Capital City Bombers.

Championship Football Coach
Rick Conner is described by his colleagues as the best high school football coach ever in Frederick County. In 1998 Rick was inducted into the Western Maryland Athletic Hall of Fame and in 2014 was inducted into the Maryland High School Football Coaches Hall of Fame. Throughout Rick’s career, he has touched many lives by being a great leader, mentor, and coach, not only on the football field but also by coaching basketball, swimming, track, and as a physical education teacher. Since 2001, as Linganore High School’s head football coach, Rick has racked up three state football championships, four state runners-up, seven regional championships and 10 Conference championships. As a defensive coordinator at Urbana High School, he helped guide them to four consecutive state championships, which is a state record, and 50 consecutive wins. At Thomas Johnson High School, he was the defensive coordinator and helped guide those teams to two state playoffs, a regional championship, and three conference championships.

Outstanding Tennis Player
Phillip Hammond graduated from Frederick High School where he was an avid and award-winning tennis player. In 1974, he was ranked first in Maryland in the 18-and-under boys doubles division. He went to Furman University in Greenville, S.C., where he was a team captain his senior year, leading the squad to the Southern Conference Championships in 1976 and 1977. In 1980, he won the Middle Atlantic Husband-Wife Mixed Doubles Championship with his wife, Jody. In 2006, Phil won the Maryland State Hardcourt and the Middle Atlantic Clay Court 50-and-over doubles championship. He is a six-time champion of the Rice Radcliffe Singles Tournament and 17-time champion of the J. Richard Remsburg Doubles Tournament at the Frederick Tennis Club. Phil helped build the Mount Saint Mary’s tennis program to a reputable and competitive program in the Northeast Conference from 2004 to 2015 as the program's coach. He led the Mount’s tennis program to winning seasons seven out of his first 10 years.

Outstanding Swimmer and Olympic Coach
Yuri Suguiyama graduated from Urbana High School where he was the Frederick News-Post Swimmer of the Year in 1997 and four-time Frederick County swim champion. He swam for the Curl-Burke Swim Club for five years, winning a national title in the 800 free relay at the 2000 Spring Nationals. Yuri continued his swimming career at the University of North Carolina, where he was a four-year swimmer and holds UNC’s record for the 1000 and 1650 freestyle events. He was an NCAA All-American selection his senior year and three-time All ACC selection. Yuri qualified for the 2000 and 2004 Olympic trials and competed in the 2000 Olympic trials. He was the assistant coach for the University of California men’s swim team that won the 2014 NCAA national title. He currently is the head coach for the University of Wisconsin men's and women's swim teams. Yuri has coached for Team USA and was the individual coach for Kate Ledecky during the 2012 Olympics in London, where the 15-year-old won the gold medal in 800 freestyle.

Hall of Fame Rising Star
This year, the Hall of Fame committee established the Alvin G. Quinn Sports Hall of Fame Rising Star Award to honor an individual or team, whose age/s are no older than 19, that has demonstrated exceptional accomplishments and contributions in their athletic field, and has brought honor to self and Frederick County during the past year. The Hall of Fame Rising Star committee unanimously voted to recognize Saylor Poffenbarger, a 16-year-old girls’ basketball standout from Middletown High School. Saylor is currently a junior at Middletown High School. She was one of only 33 players who received an invitation to try out for the 2019 USA Women’s U16 National Team and in May 2019 was named to the 12-member roster. In June of 2019, Saylor helped led Team USA to a gold medal in the FIBA U16 Women's Americas Championship, beating Canada 87-37 in the Gold Medal game. Team USA went 6-0 in Puerto Aysan, Chile, beating teams from Brazil, Puerto Rico, El Salvador, Chile, Mexico, and Canada. Saylor contributed significantly to the team’s success. She average 18.4 minutes per game, 7.2 points per game and scored 10 points in the gold medal game against Canada. Saylor has been recognized as a 2018 and 2019 All-State first team selection, 2019 All-Area, and 2018-2019 Central Maryland Conference Player of the Year. She has compiled 1,109 points, 597 rebounds, 207 assists, 137 steals, and 149 blocked shot through her sophomore year at Middletown High School. Saylor verbally committed to play college basketball at the University of Connecticut, the most successful women’s college basketball program in the national with 11 Division I national championships and 19 Final Four appearances since 1995.

About the Y
The Y is one of the nation’s leading nonprofits strengthening communities through youth development, healthy living and social responsibility. Across the U.S., 2,700 Y’s engage 21 million men, women and children – regardless of age, income or background – to nurture the potential of children and teens, improve the nation’s health and well-being, and provide opportunities to give back and support neighbors. Anchored in more than 10,000 communities, the Y has the long-standing relationships and physical presence not just to promise, but also to deliver, lasting personal and social change. http://www.frederickymca.org