A family's decision to donate the organs of their teenage son, Michael, gave others a second chance at life. Today, Donor Network West - the organ and tissue recovery organization for Northern California and Nevada - announced that his legacy of life will be celebrated at the Rose Parade®. 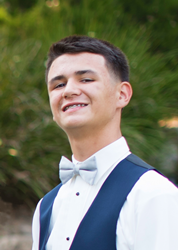 "Michael will always be remembered as the young hero who transformed the lives of others in great need."

Donor Network West announced today that Michael Balsley-Rodriguez will be recognized and remembered at the 131st Rose Parade® with a floral portrait on the Donate Life Rose Parade® float. The Stockton, California resident died unexpectedly two years ago at age 13 and saved multiple lives through organ donation.

Michael’s promise of a bright future came to a sudden end in 2017 after succumbing to an accidental, self-inflicted gunshot. He was an energetic boy who loved dogs, video games, and pranks. He was also an avid fan of the Oakland Raiders and San Francisco Giants, played youth football, and dreamt of becoming a player and coach for the Oregon Ducks.

Michael saved five individuals through the donation of his heart, lungs, liver, kidneys and pancreas.

“He was very sweet, happy, and funny. He was my baby, my mama’s boy,” says Silvia Van Steyn, Michael’s mother. “We were trying to make sense of it all and wanted to give meaning to his short life. That is why we wanted organ donation.”

A floral portrait of the teenager will adorn the 2020 Donate Life Rose Parade® float, Light in the Darkness, thanks to the generous support of Sallop Insurance Inc. and The Zenith insurance companies. His floragraph will be one of 44 portraits made from organic materials in memory of organ, eye, and tissue donors from across the United States.

“Michael will always be remembered as the young hero who transformed the lives of others in great need,” says Janice F. Whaley, Chief Executive Officer of Donor Network West. “His family’s decision to donate life forever changed the lives of the recipients and continues to inspire our communities to register as organ and tissue donors.”

The Rose Parade, which will take place in Pasadena, CA on January 1, 2020, will welcome an estimated 700,000 spectators and will be watched by over 70 million viewers worldwide on television. The parade’s theme, The Power of Hope, honors the opportunity to look beyond challenges of the moment and light a path to a brighter future.

The Donate Life Rose Parade® float shares the Power of Hope by highlighting Southeast Asia’s Diwali, or the Festival of Lights, a celebration of light shining in darkness. The float will include 70 participants from across the U.S. Twenty-six organ and tissue recipients or living donors will be atop or walk alongside the float during the parade.

Floral displays overflow from intricate vessels adorned with 44 memorial floral portraits that honor the Gift of Life and light given by deceased organ, eye and tissue donors.

Nearly 10,000 people await a life-saving organ transplant in Northern California and Nevada. One organ donor can save the lives of up to eight people and a tissue donor can heal more than 75 others Anyone can register as a donor at DonorNetworkWest.org or at the DMV.

About Donor Network West
Donor Network West saves and heals lives by facilitating organ and tissue recovery for transplantation. The organization was established in 1987, and is an official Donate Life organization accredited by the Association of Organ Procurement Organizations (AOPO) and the American Association of Tissue Banks (AATB). Federally designated to serve 40 counties in Northern California and Nevada, Donor Network West partners with the Department of Motor Vehicles and the state-authorized donor registries. For information, visit DonorNetworkWest.org and follow us on social media: @mydnwest.

About the Pasadena Tournament of Roses®
The Tournament of Roses is a volunteer organization that hosts America’s New Year Celebration® with the Rose Parade® presented by Honda, the Rose Bowl Game® presented by Northwestern Mutual and a variety of accompanying events. 935 volunteer members of the association will drive the success of 131st Rose Parade themed “The Power of Hope,” on Wednesday, January 1, 2020, followed by the 106th Rose Bowl Game. For more information, visit http://www.tournamentofroses.com. Like us on Facebook and follow us on Twitter, Instagram and YouTube.