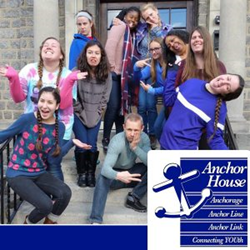 One line in particular really stood out to me from Anchor House, ‘They used the analogy of a ship dropping its anchor to keep it safe in the storm to visualize the mission of the agency.’ I found this quote to be inspiring

The Steven D. Mooney Agency, a family managed firm offering asset protection and financial planning assistance that serves families and businesses throughout the Philadelphia and New York regions, is announcing a charity event to raise community support for the youth services programs offered by Anchor House.

Since 1978, Anchor House has worked to provide services to young people in the Trenton region facing homelessness or abuse. Anchor House offers young people aged 12-21 a broad range of assistance, from temporary shelter and food to educational outreach programs and transitional or supportive housing.

“One line in particular really stood out to me from Anchor House, ‘They used the analogy of a ship dropping its anchor to keep it safe in the storm to visualize the mission of the agency.’ I found this quote to be inspiring as we are all in need of a safe haven and someone to keep us safe,” says Steven Mooney, owner and executive director of the Steven D. Mooney Agency.

Mooney and his team are generating community support for the Anchor House charity event by connecting with regional educators, families, and associates over a series of social media and email information sharing tools. Future efforts to produce support will include a cover story featuring the charity drive which will appear in the newest edition of the Steven D. Mooney Agency online magazine “Our Hometown”: http://stevendmooneyinsurance.com/magazines/.

This is only the first of many charity events that the Mooney team plans to host in the near future. As recent affiliates of the “Agents of Change” charity support network, the firm has committed to selecting and supporting a series of nonprofit organizations in the Trenton area at the rate of one new charity every other month.

Readers that want to join the Steven D. Mooney Agency and be part of the charity drive to assist the efforts of the Anchor House are encouraged to make a concerted effort to support the event by following this link and taking action: http://stevendmooneyinsurance.com/causes/because-we-all-need-our-anchor/. More information on future charity drives hosted by the Mooney Agency team will be announced from the firm’s Community Causes page, which can be bookmarked here: http://stevendmooneyinsurance.com/community/.

About the Steven D. Mooney Agency

As a Personal Finance Representative in Hamilton, agency owner Steven Mooney knows many local families. His knowledge and understanding of the people in his community ensures that clients of the Steven D. Mooney Agency are provided with an outstanding level of service. Steven and his team look forward to helping families protect the things that are most important – family, home, car and more. The Steven D. Mooney Agency also offers clients a preparation strategy for achieving their financial goals. To contact an expert at the Steven D. Mooney Agency, visit http://stevendmooneyinsurance.com/ or call (609) 586-8100.