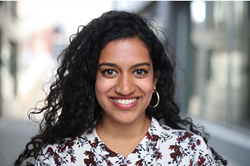 “We were just young people who were fed up with seeing politicians kicking the can down the road, sweeping what is the greatest threat facing our generation under the rug and refusing to deal with the reality of the crisis at hand." - Varshini Prakash on NPR's "How I Built This."

Dickinson will present Varshini Prakash, executive director and co-founder of Sunrise Movement, a grassroots organization of young people working to stop climate change and create good-paying jobs in the process, with The Sam Rose ’58 and Julie Walters Prize at Dickinson College for Global Environmental Activism. The $100,000 prize is given annually to an individual or organization making a defining difference and advancing responsible action on behalf of the planet, its people and resources.

Prakash and a handful of like-minded activists launched Sunrise Movement in the summer of 2017. “We were just young people who were fed up with seeing politicians kicking the can down the road, sweeping what is the greatest threat facing our generation under the rug and refusing to deal with the reality of the crisis at hand,” Prakash told NPR.

Focusing on growth through grassroots organizing and political action with candidate endorsements, the group gained recognition and support after it organized a sit-in at House Speaker Nancy Pelosi’s Washington, D.C., office in 2018 with backing from U.S. Rep. Alexandria Ocasio-Cortez. Now one of the largest youth movements in the country, Sunrise is leading the charge for the Green New Deal, a constellation of public policy proposals to address climate change while creating jobs and reducing economic inequality.

Prakash has used her growing public profile to tirelessly advocate for Sunrise’s principles. Her work has been featured by The New York Times, The Washington Post, BBC News, MSNBC and many other outlets. She is the daughter of immigrants from India, and Prakash said the 2004 Indian Ocean tsunami was one of the first moments that pushed her toward getting involved in climate action. Prakash was named to Forbes’ 30 under 30 list for law and policy and the TIME 100 Next, a list of rising stars shaping politics, popular culture, science and more. She is a graduate of the University of Massachusetts Amherst.

In addition to the monetary award, Dickinson’s Rose-Walters Prize includes a short residency in the 2021-22 academic year. During that residency, Prakash will meet with Dickinson’s many student environmental-leadership groups and faculty, participate in class discussions and give a public presentation, with exact dates to be determined.

Since its establishment in 2012, the Rose-Walters prize has connected Dickinson students with thought-leaders from the Clean Air Task Force, the Environmental Protection Agency, the Natural Resources Defense Council and other prominent organizations. It has also honored award-winning artists and writers raising awareness for climate change, including actor Mark Ruffalo, Pulitzer Prize-winner Elizabeth Kolbert and award-winning nature photographer James Balog.

Dickinson is a highly selective private liberal-arts college of 2,300 students and a national leader and innovator in sustainability education. Students are challenged through classroom studies, living laboratories, service learning, student-faculty research and study abroad to build the knowledge and skills that are needed to create a sustainable world. Opportunities for hands-on learning include working with community groups to protect local watersheds and air quality, learning about solar energy, growing food on the college’s USDA-certified organic farm and producing biogas from food waste. Sustainable practices and values are underscored by a commitment to carbon neutrality, green building practices, socially responsible investment and diverse community engagement.

Dickinson’s achievements and leadership have earned the highest recognitions from the Association for the Advancement of Sustainability in Higher Education, Sierra Magazine, the Sustainable Endowments Institute, The Princeton Review and Second Nature.