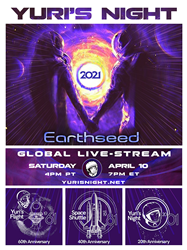 “It’s been such a privilege to work with so many amazing people over the last 20 years who have worked to make all this magic happen," said Loretta Hidalgo Whitesides, cofounder of Yuri’s Night.

The Global Livestream will be available free of charge on our website. The Virtual Party ticket will include a pre-party meet and mingle at 3pm, with games, art, vendor exhibits, job opportunities, and interactive “tables” where you can video chat with other guests. You can also connect with amazing Yuri’s Night Ambassadors like Sarafina Nance, Everyday Astronaut Tim Dodd, and Bobak Ferdowsi, and join a kicking after-party with the world class NERVO twins DJing! Backstage passes to the Virtual Party are $15 and are available at http://www.yurisnight.net/livestream.

VVIP packages include the above, plus a Party Package shipped to the guest's home (U.S. addresses only, 21+) with a bottle of Hendrick’s Limited Edition Lunar Gin, Russian Standard Vodka, Courvoisier Cognac, plus mixers to make our two signature cocktails: the Moonbathing Highball and the American Cosmonaut. The Party Pack also includes Yuri’s Night 20th Anniversary swag, and a Yuri’s Night 20th Anniversary shirt. You will also have access to an exclusive VVIP lounge for the Livestream event and a Private Pre-party with Richard Garriott, where you can ask questions and mix cocktails with our chief mixologist Lauren Paylor. This package is extremely limited. Buy your tickets by Apr 4 to ensure your packages arrive on time!

The theme of this year’s event, “Earthseed,’ is a tip of the hat to African-American Science Fiction writer, Octavia Butler’s book Parable of the Sower. The book shares a powerful vision for a spiritual path that can bring communities together during hard times and inspire them with a vision of bringing life to the stars. Loretta added that, “That vision seemed fitting this year.”

Also on tap will be a variety of amazing art and music. We are especially excited to be able to share a sneak preview of the new #ArtTogetherNow collaborative music video project from OK GO Sandbox made by fans in their homes during the pandemic. The band OK Go is also receiving the "Spirit of Yuri’s Night Award" for both their fantastically good “Upside Down and Inside Out'' video (shot entirely while floating weightless!) and their work on OK Go Sandbox, providing critical tools for teachers to use their innovative videos to inspire students to learn. The award celebrates people that have brought together space and art in amazing ways. Previous winners include Chris Hadfield for his Bowie-inspired music video shot in space and Disney+’s Miles From Tomorrowland show that has a whole episode about Yuri’s Night.

The proceeds from the event will go to support our new Cosmic Odyssey Scholarship to send kids with pediatric cancer to a special Family Space Camp experience. Niko Banks launched the project to “pay it forward” for the Space Camp he was given after his own pediatric cancer treatments. Inventor Simone Giertz, who also had a brain tumor and Everyday Astronaut Tim Dodd will share more about this new scholarship and how to bid on a package to take your family to train at Space Camp Aug. 13-15, 2021 and help support this program!

Loretta Hidalgo Whitesides, cofounder of Yuri’s Night, who has been sharing her memories of the last 20 years of Yuri’s Night events via Twitter during the lead-up to this event, said, “It’s been such a privilege to work with so many amazing people over the last 20 years who have worked to make all this magic happen. It’s amazing how many people have gotten married, how many companies have gotten their start and how many friends have been met at Yuri’s Night.”

To learn more about the 2021 global livestream event, visit https://yurisnight.net/livestream

Yuri's Night is a holiday that celebrates the power of space to bring the world together. We create amazing events that join artists and musicians with scientists, engineers and astronauts to unite humanity and inspire us to be our best selves. We encourage people around the world to host events on or around April 12th every year to honor the joint space anniversaries of the former space rivals: 12 Apr 1961 when Russia sent the 1st human to space, Cosmonaut Yuri Gagarin, and 12 Apr 1981 when the U.S. launched the 1st Space Shuttle. Yuri's Night has been celebrated since 2001, and has included parties on all seven continents, on the International Space Station, and even by the Curiosity rover on Mars. Our intention is Yuri’s Night is still celebrated 10,000 years in the future when Earth’s descendants are scattered across 12 different star systems.