Yusun Yohance Beck’s newly released “Gladiator Sparticus” is a riveting story of an immortal man tasked by God to battle the evil dominating the world.

“Gladiator Sparticus: Story One: That Was Then” from Christian Faith Publishing author Yusun Yohance Beck is an electrifying story about an imperishable man’s faith-driven journey amid the shadows that seek mankind’s destruction. 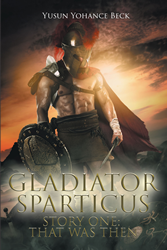 Beck shares, “A fictional character is created as an example, and he is meant to demonstrate a man that runs away from his calling only to find that his chief purpose in life was to fulfill his calling, serving the Maker and trusting Him always. An immortal from 480 BC is resurrected by the Creator after an arrow pierces his heart. His job is to fight against the Prince of the Air and the principalities disguised as the mythological gods, the shadow forces, portrayers of light, and criminals. This historical fiction travels through 480 BC to 800 AD. His powers are not his own, for they are gifted from the Creator, and they will be dulled if he refuses or turns away, yet the Creator knows that he is going to make the right decision all along. Sparticus meets many, including Leonidas, Alcibiades, heroes, Alexander the Great, Spartacus, and Julius Caesar. During this compelling story, he loses his wife, his children are scattered, and his nation is torn apart. Afterward, he runs from his mission for so long that he finally decides that there is no running from a deity that created him, the world, and the entire universe. Escaping an omnipresent, omniscient, and omnipotent being proves to be impossible! Hence, a turning point was the capture in Rome where he witnessed much and had seen one event that illuminated his mind; thus, he submits to the grand authority to take up the cost and faces off with his predetermined path around 800 AD taking on his first villain. At the end of the day, this is a Christian hero dealing with adult issues. An imperfect man is saved by that same omnipotent deity undergoing a process where he struggles with his own selfishness before fully accepting the cost of the ‘Great Commission.’”

Published by Christian Faith Publishing, Yusun Yohance Beck’s new book depicts a longstanding war between good and evil where God’s glory and mercy shines through and shatters frailty and emboldens those who steadfastly cling to Him.

This book is an astounding blend of history, fiction, action, and drama that also portrays a spiritual pilgrimage to unveiling one’s true purpose in God.

View the synopsis of “Gladiator Sparticus: Story One: That Was Then” on YouTube.

Consumers can purchase “Gladiator Sparticus: Story One: That Was Then” at traditional brick-and-mortar bookstores or online at Amazon.com, Apple iTunes store, or Barnes and Noble.

For additional information or inquiries about “Gladiator Sparticus: Story One: That Was Then,” contact the Christian Faith Publishing media department at 866-554-0919.