Zahia Rahmani's "Muslim": A Novel, translated by Matt Reeck and published by Deep Vellum, wins the 2020 Albertine Prize, an annual reader's-choice award that recognizes US-based readers’ favorite work of contemporary French fiction translated and published in the US during the previous year. 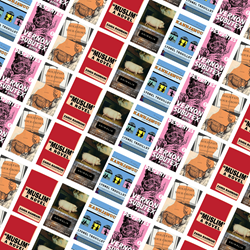 Zahia Rahmani’s “Muslim”: A Novel, which follows a young Kabylian woman immersing herself in her memories and questioning her identity, was named winner of the 2020 Albertine Prize, presented by the Cultural Services of the French Embassy and supported by Van Cleef & Arpels.

An annual reader's-choice award, the Albertine Prize recognizes US-based readers’ favorite work of contemporary French fiction translated and published in the US during the previous year. The $10,000 award honors the author and translator.

Narrated in five “acts”, “Muslim”: A Novel inventively combines fiction, lyrical essay and autobiographic elements. Born into the newly independent, conflict-stricken Kabylian region of Algeria in 1962, Rahmani’s nameless narrator must reckon with a multitude of assigned identities. First forced, while still in Algeria, to adopt a Muslim identity; later fleeing to Europe and becoming a French citizen, our narrator inhabits the in-between, a “distant nowhere.” Brilliantly translated from the French by Matt Reeck, “Muslim”: A Novel is itself in constant conversation with the politics of translation—between dream and memory, between identity and self, across culture and language, it is concerned with bridging the gaps of interpretation, in filling the holes that are left behind, and in retrieving what (or who) gets lost.

“By exploring the relationship between language and identity in “Muslim”: A Novel, Zahia Rahmani interrogates what it means to be French and Muslim in brilliant and nuanced ways” said Gaëtan Bruel, cultural counselor of the French Embassy. “The many readers who voted for this year’s winner have chosen a book that reflects today’s world, and we are very proud to champion French contemporary literature in all its richness and diversity through this Prize.”

We also extend our congratulations to Deep Vellum, which recently took over the Dalkey Archive Press after the passing of its founder John O’Brien, who was instrumental in bringing French literature to the US through translation.

The publishing house was fêted on December 9 during a virtual live ceremony at 1pm EST, co-hosted by the Prize’s honorary chairs, American author Rachel Kushner and French literary journalist François Busnel. Zahia Rahmani and translator Matt Reeck, were presented the award during the ceremony, followed by a discussion with Kushner moderated by Lit Hub’s Executive Editor John Freeman.

About Zahia Rahmani
Zahia Rahmani is a writer and art historian, in charge of global art history exhibitions at INHA. Born in Algeria to a Harki father and a Kabylian mother, she moved to France in 1967. “Muslim”: A Novel is the second volume of a trilogy that includes Moze, published in 2002, and France, Story of a Childhood, published in 2006, all published by Sabine Wespieser in France.

About Matt Reeck
Matt Reeck has translated works from French, Urdu, Hindi and Korean. In Spring 2021, he will be the Princeton Translator in Residence. Reeck has won fellowships from the PEN/Heim Fund and the NEA. His most recent translations include: from Urdu, The Chronicle by International Man Booker Prize Finalist Intizar Husain (Penguin-India, 2019); and from French, French Guiana: Memory Traces of the Penal Colony by Patrick Chamoiseau (Wesleyan University Press, 2020). Next spring, Penguin-India will publish his translation from the Hindi of Selected Satire: Fifty Years of Ignorance by Shrilal Shukla.

About Albertine
Albertine is a bookshop that brings to life French-American intellectual exchange. A permanent venue for free events and debates, the space offers more than 14,000 contemporary and classic titles from over 30 French-speaking countries around the world. Visit [http://www.albertine.com.

About the Cultural Services of the French Embassy
The Cultural Services of the French Embassy promotes the best of French arts, literature, cinema, digital innovation, language, and higher education across the US. Based in New York City, Washington D.C., and eight other cities across the country, the Cultural Services brings artists, authors, intellectuals and innovators to cities nationwide. It also builds partnerships between French and American artists, institutions and universities on both sides of the Atlantic. In New York, through its bookshop Albertine, it fosters French-American exchange around literature and the arts. [http://www.frenchculture.org.

About Van Cleef & Arpels
Van Cleef & Arpels was born in Paris’ Place Vendôme in 1906, following Alfred Van Cleef’s marriage to Estelle Arpels in 1895. Always striving for excellence, the Maison has become a worldwide reference through its unique designs, its choice of exceptional stones and its virtuoso craftsmanship, offering jewels and timepieces that tell stories and bring enchantment to life. Literature and poetry from famed authors such as Shakespeare, Jules Verne and Charles Perrault have inspired collections that go beyond the world of High Jewelry, allowing friends of the Maison to escape to mythical lands filled with magic and fairies, and to explore new horizons, from the mysterious depths of the ocean to the heart of the galaxy. Visit [http://www.VanCleefArpels.com for additional information.

About Lit Hub
Lit Hub is an organizing principle in the service of literary culture, a single, trusted, daily source for all the news, ideas and richness of contemporary literary life. There is more great literary content online than ever before, but it is scattered, easily lost—with the help of its editorial partners, Lit Hub is a site readers can rely on for smart, engaged, entertaining writing about all things books. Each day—alongside original content and exclusive excerpts—Literary Hub is proud to showcase an editorial feature from one of its many partners from across the literary spectrum: publishers big and small, journals, bookstores, and non-profits. http://lithub.com/