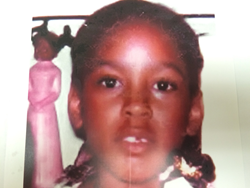 Velicia Alston as a child.

The case was filed in the Circuit Court of Oregon for the County of Multnomah, Case No. 14-CV-18423. The lawsuit was filed on behalf of Velicia Alston and a second unnamed Plaintiff, John Roe, who were both minor children when their families were active in the Congregation at the time of the alleged abuse.

As a result of Castellanos’ alleged sexual abuse, molestation, and breach of trust, the lawsuit alleges that the Plaintiffs suffered and continue to suffer severe and debilitating physical, mental, and emotional injury, including pain and suffering, physical and emotional trauma, and permanent psychological damage distinct from the abuse itself. The lawsuit asks for damages and future costs for counseling, psychiatric and psychological medical treatment.

The complaints allege that the defendants named in the case, the Hillsboro Congregation, the Watchtower Bible and Tract Society of New York, Inc., were negligent in their legal duty to protect the minor children in their care and failed in their duty to prevent the perpetrator, Daniel Castellanos, from sexually molesting children. The complaint also alleges that the defendants owed a duty to investigate and not employ the perpetrator and failed to conduct a reasonable investigation of the alleged abuse.

According to the complaint, the Defendants created a foreseeable risk of Castellanos abusing minor congregants, including Plaintiffs in the following ways:

Irwin Zalkin expects to be admitted pro hac vice in this case.

About The Zalkin Law Firm
With offices in San Diego and New York, The Zalkin Law Firm is one of the leading sexual abuse and personal injury firms in the country. The firm's lawyers have represented hundreds of survivors of childhood sexual abuse and achieved groundbreaking results in numerous high-profile clergy abuse cases across the United States. The Zalkin Law Firm has aggressively represented survivors who suffered child sexual abuse and sexual assault while members of religious and other organizations, including the Catholic Church, foster care, Boy Scouts, recovery homes, foreign student exchange programs, colleges and the Jehovah’s Witnesses. The firm has negotiated over $200 million in settlements for victims in Catholic clergy sex abuse cases. Recently, the Zalkin Law firm represented a victim of childhood sexual abuse at a San Diego Jehovah’s Witnesses congregation who was awarded $13.5 million in damages in a similar case (Case No. 37-2012-00099849-CU-PO-CTL).

About Kristian Roggendorf
For over 14 years, Kristian Roggendorf has been at the forefront of representing victims of child abuse in Oregon. He has helped define Oregon law through successful trials and appeals in lawsuits against the Boy Scouts, the Catholic Church, the Mormon Church, public school districts, and the Oregon Department of Human Services, among others. Recently, Mr. Roggendorf made headlines bringing lawsuits against the Archdiocese of Portland for abuse by notorious child molester Fr. Maurice Grammond, and has over 30 reported cases to his credit, including some of the most significant Oregon child abuse decisions over the last 14 years.

About Paul Mones, Co- Attorney
For over thirty-three years Paul Mones has dedicated his legal practice to protecting victims of child abuse. The primary focus of his work is representing victims of sexual abuse against the institutions in which children were sexually molested. These efforts have included numerous lawsuits against the Boy Scouts of America, the Catholic Church, private and public schools and other youth-serving organizations like sports teams throughout the United States. Paul is a graduate of the University of North Carolina Law School and is a member of the bar in California, Massachusetts and Oregon.