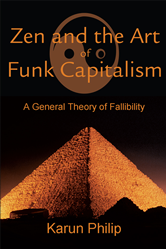 A spirited treatise on the philosophy of economics, Philip’s text examines such interwoven issues of poverty, capitalism, fallibility, human knowledge, education, societal welfare, entrepreneurship, and more. —The US Review of Books

To accept the fallibility of human knowledge is to accept that there are no absolutes. As Karun Philip explains in his book, “Zen and the Art of Funk Capitalism,” it is crucial to acknowledge the inherent possibility of error or failure in any decision, as it encourages people to make choices based on empirical evidence rather than theoretical research.

Applying the theory of fallibility to the economic philosophy of Friedrich Hayek, Philip coins the term “Hayek’s Axiom,” which asserts that all economic theories are fallible, therefore the solution to current economic dilemmas must be rooted in real-world evidence. Through analyzing the strengths and shortcomings of global economies past and present, he determines that a libertarian free market approach offers the most beneficial pathway to eliminating poverty.

In “Zen and the Art of Funk Capitalism,” Philip identifies coercion, including nondisclosure and fraud, as one of modern capitalism’s most detrimental flaws. He argues that the protection of individual liberties should be the central role of law and government, with a focus on eliminating coercion in all its forms to eliminate predatory behaviors that take advantage of economically marginalized groups. He also advocates for a “maternal libertarianism,” which means the government would also provide vital resources like food, water and shelter for those in need. However, with decreased coercion and increased transparency, citizens would already have many of the tools and resources required to make beneficial economic decisions.

Philip particularly focuses on education as the key to economic freedom, explaining that outlawing coercion would dissolve the barrier previously keeping marginalized groups from higher education. He proposes changes to the educational system that would allow students access to data that shows what skills are needed in the market and which institutions boast the most success. He also envisions a financial system with more comprehensive safety nets in place so that those at an economic disadvantage can reap the rewards of education and entrepreneurship without worrying about falling into a debt trap.

“Ultimately, this is a manual for restructuring education and banking in order to eliminate global poverty,” said Philip. “Unlike some traditional socialist philosophies, ‘Zen and the Art of Funk Capitalism’ outlines a free market libertarian approach to achieve some of the goals of such philosophies without the need for government action or the changing of power structures.”

“A spirited treatise on the philosophy of economics, Philip’s text examines such interwoven issues of poverty, capitalism, fallibility, human knowledge, education, societal welfare, entrepreneurship, and more,” wrote The US Review of Books.

About the author
Dr. Karun Philip is the Chairman and CEO and a co-founder of Tranquilmoney, Inc., a New York-based software company. Prior to this, Philip ran Imagine Technologies, Inc., a company focused on using proprietary imaging and workflow technologies to enable and outsource remote back office operations for the healthcare industries. He also works in the social private sector and is dedicated to developing project-funded solutions to economic problems in lieu of government grants or private donors. He is in the process of developing Kitcoin, knowledge investment tokens that are linked directly to the U.S. dollar and allow the financing of job skills training both to those interested in receiving training and those performing the training. To learn more, visit karunphilip.com.