The agreement is with new franchise owners in Parker, Colo. 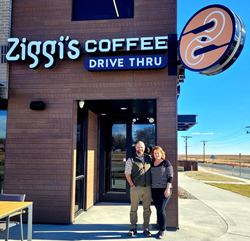 It was extremely important to us that we were able to contribute to the community that we actively work and live in. Ziggi’s made this possible through their national franchise program.

The Cazares’ plan to open their first Ziggi’s location in Parker, Colo. “When we first decided to become franchise owners, it was with our community of Parker at the front of our mind,” said Ron and Denise Cazares. “It was extremely important to us that we were able to contribute to the community that we actively work and live in. Ziggi’s made this possible through their national franchise program.”

With the same attention to detail that has gone into creating the perfect cup of coffee, the Ziggi’s Coffee Franchise opportunity was created after over a decade of running successful café and drive-thru locations. Ziggi’s developed a process and system for franchises to duplicate and launched their national franchise program in 2016 and has since experienced great success.

“The entire Ziggi’s franchise process was extremely educational and well-managed,” continued Ron and Denise Cazares. “The Ziggi’s Coffee Franchise team shares our community-first and family-oriented values, so signing a multi-unit deal with them was an easy decision. We are excited to bring the Ziggi’s brand to the Parker community and grow with this company.”

The company celebrated their 100th franchise singing just six months ago and have already signed an additional 50 agreements. With 44 open locations nationwide and over 100 in development, Ziggi’s Coffee is positioned for remarkable growth.

“This franchise agreement signing is a milestone many franchise companies never reach,” said Justin Livingston, Vice President of Franchise Development. “Signings, however, are only as good as the success of the franchisees. The incredible validation of Ziggi's franchise family and expansion of additional units from current franchisees speaks volumes for the support, systems and market dominance of a Ziggi's Coffee location. The future is bright for this industry leader.”

This franchise signing comes at an exciting time for Ziggi’s Coffee as the new headquarters building just opened in Mead, Colo. and will house the corporate team, an on-site training facility and a café and convenient drive-thru. Training, marketing and operational support is provided by the Ziggi’s Coffee Corporate Team to the franchise owners every step of the way to ensure continuity and success. Owning a Ziggi’s Coffee franchise is a chance to take control, leave a legacy and do fulfilling work that changes families for generations to come.

About Ziggi’s Coffee
Ziggi’s Coffee, recently ranked among the top half of companies on the 2021 Entrepreneur Magazine Franchise 500®, is a leading specialty coffee shop and drive-thru franchise dedicated to serving only the finest roasted coffee, uniquely handcrafted drinks, and amazing, locally-made breakfast, lunch and snack options. Founded in 2004, the Colorado-based company is on a mission to elevate the standard of service within the coffee shop industry. From specializing in a variety of great-tasting menu items to providing fast and friendly service, the Ziggi’s Coffee brand is focused on creating a positive experience that is faster, more authentic, and convenient for the demand of consumers seeking higher-quality coffee and food options on the go. In addition to its distinctive menu and superior service, Ziggi’s Coffee is also committed to making a positive difference in the local communities it serves. With 44 locations nationwide and over 100 additional units in development, Ziggi’s Coffee is positioned to quickly grow its presence in a variety of communities across the U.S.