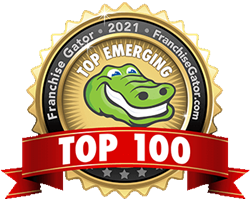 With 29 locations in five states, 93 franchise agreements and 54 locations in development, Ziggi’s Coffee is proud to be named a Top Emerging Franchise.

Franchise Gator has chosen Ziggi’s Coffee as a Top Emerging Franchise for 2021. This is the 8th year that the online franchise directory has published a Top Emerging ranking, and was created to help identify developing franchises with 50 or fewer operating units that have shown promising signs of strong growth.

“We created this list because we know that many who are interested in a franchise opportunity are seeking to join smaller systems,” said Eric Bell, General Manager at Franchise Gator. “They are looking for a wave to ride. We wanted to present them with a list of companies who, according to the information we gathered and their most recent FDD’s, look like they are putting all of the right pieces in place.”

Identified as a rising concept with 50 or fewer operating units, Ziggi’s Coffee is ranked as the number three franchise on the Top Emerging list. The company was also included in Franchise Gator’s Fastest Growing Franchises list, ranking fifth, and the annual Top 100, ranking No. 74.

“With 29 locations in five states, 93 franchise agreements and 54 locations in development, Ziggi’s Coffee is proud to be named a Top Emerging Franchise,” said Justin Livingston, Vice President of Franchise Development for Ziggi’s Coffee. “The past year has been difficult in many ways, but Ziggi’s Coffee continues to prove its stamina and resiliency by not only surviving, but thriving. This brand has what it takes to weather the storm and has continued to offer those who are dreaming of financial independence and business ownership, a pathway to success.”

Franchise Gator, one of the leading destinations for those seeking to invest in a franchise opportunity, reviewed hundreds of Franchise Disclosure Documents (FDDs) to formulate their rankings. Growth in units, turnover, and financials are just a few of the items taken into consideration. The staff also takes a look at awards, the Executive team, and participation in the franchise community.

“Congratulations to Ziggi’s Coffee,” said Bell. “We expect this to be just one of many accolades to come.”

About Ziggi’s Coffee
Ziggi’s Coffee, recently ranked among the top half of companies on the 2021 Entrepreneur Magazine Franchise 500®, is a leading specialty coffee shop and drive-thru franchise dedicated to serving only the finest roasted coffee, uniquely handcrafted drinks, and amazing, locally-made breakfast, lunch and snack options. Founded in 2004, the Colorado-based company is on a mission to elevate the standard of service within the coffee shop industry. From specializing in a variety of great-tasting menu items to providing fast and friendly service, the Ziggi’s Coffee brand is focused on creating a positive experience that is faster, more authentic and convenient for the demand of consumers seeking higher-quality coffee and food options on the go. In addition to its distinctive menu and superior service, Ziggi’s Coffee is also committed to making a positive difference in the local communities it serves. With 29 locations nationwide and over 50 additional units in development, Ziggi’s Coffee is positioned to quickly grow its presence in a variety of communities across the U.S.