The seventh annual SP200 ranks the most powerful executives in the residential real estate industry. 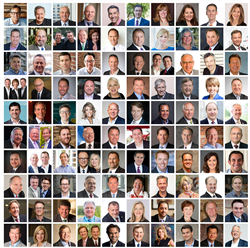 We publish the SP200 each year to help industry participants gain a better understanding of the scope and extent of the many significant companies and leaders that shape their industry.

The Swanepoel Power 200 (SP200), the definitive ranking of the residential real estate industry’s most powerful and influential leaders, has named Zillow Group Co-Founder and CEO Rich Barton as the most powerful leader in 2020. Published by T3 Sixty, the seventh annual edition of the report is out today at sp200.com.

T3 Sixty extensively analyzes industry executives and C-suite leaders of all significant, large and strategically important companies in the residential real estate brokerage industry to build each year’s list. The process starts with over 3,000 executives and involves a mix of quantitative and qualitative components used to review leaders, including recent developments at their company, their tenure, their role in their organization and its production, and vigorous thought and debate about their power and influence in the industry.

Barton ascends to the top of the 2020 list based on his full-force return to lead the company he co-founded in 2005 as CEO in 2019. He has brought a bold new vision and direction to Zillow focused on reengineering the real estate transaction around the iBuying business model with the company’s new homebuying and selling Homes division, which the company projects can produce $20 billion in annual revenue.

“We publish the SP200 each year to help industry participants gain a better understanding of the scope and extent of the many significant companies and leaders that shape their industry,” said T3 Sixty Chairman and CEO Stefan Swanepoel. “It is fascinating to track how different leaders and roles shift every year. The insights of developments on the highest levels of the industry at any given time provide invaluable strategic insight of who you should be working with, learning from and who to watch out for.

Examples of significant changes among leaders in the 2020 report include:

The final findings of this extensive annual research can be found at sp200.com. The SP200 includes 247 CEOs, C-suite leaders and other real estate players with significant influence. The rankings are also organized into subcategories, including the top association and MLS executives, leading women, leading technologists, and the official annual trendsetter list of people to watch.
The SP200 leader rankings is the first of five annual lists T3 Sixty publishes every year. It also publishes:


Together, these publications comprise the Real Estate Almanac, the most wide-ranging compendium of its kind in the industry.

“Comprehensive quality data is the cornerstone of smart decisions and with the constantly shifting landscaping, the Real Estate Almanac will become the industry’s authority,” said Stefan Swanepoel, himself a New York Times best-selling author, and author and co-author of over 52 books and reports.

About T3 Sixty
As the residential real estate brokerage industry’s largest management consultancy and research company T3 Sixty sets the standard for excellence and industry benchmarking. T3 Sixty is also the publisher of quality reports such as the Swanepoel Trends Report, the SP 200, the Mega 1000, the DANGER Report, the MLS 2022 Agenda and the Real Estate Almanac. For more information go to t360.com