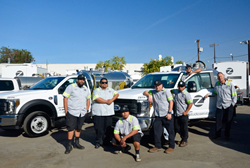 Zio is the only truck and van rental company that is signatory with Teamsters Local 399 outside of the major studios, setting it apart from the industry's other independent, non-union truck rental companies.

Zio Studio Services, a top independent production industry vehicle rental company in Los Angeles, and Teamsters Local 399, which represents workers in the motion picture industry, have agreed on a new 3-year contract for Zio’s drivers and technicians. Negotiations were led by Teamsters Local 399 Secretary-Treasurer Steve Dayan and Zio Studio Services Chief Executive Officer Louis Dargenzio. The new agreement will provide increased health and retirement benefits, in addition to increased wages and working conditions for the employees covered under the CBA.

This agreement marks Zio Studio Services as the only union restroom rental company in California that can accommodate several large, blockbuster productions simultaneously. Additionally, Zio is the only truck and van rental company that is signatory with Teamsters Local 399 outside of the major studios, setting it apart from the industry’s other independent, non-union truck rental companies. Clients will be unaffected, as drivers will continue to be employees of Zio Studio Services.

“Throughout negotiations, Zio’s mission was to support our Teamster brothers and sisters’ right to collective bargaining,” said Dargenzio. “This agreement is going to create a lot of opportunities for our new 399 members. These are very exciting times for Zio, and we are optimistic that location managers will continue to support Zio’s effort by booking our restrooms and pumping services.”

“Most private employers facing unionization try to avoid the process. Zio did the opposite, supporting its employees, in what was an amicable negotiation for all parties,” said Dayan.

“We are extremely grateful for the opportunities Zio has created for us and it is awesome to see our hard work and dedication paying off. We are very excited about our future here at Zio Studio Services!” said Z Crew Driver Rudy Villagrana.

Zio Studio Services is committed to taking care of its workers with plans to unionize other divisions of the company in the near future.

About Zio Studio Services:
Zio Studio Services is Los Angeles’s top choice for a wide variety of industry-standard production vehicles—all delivered with unparalleled personalized service. Founded by Louis Dargenzio, Zio started in 2007 with only three trucks. Today, Zio has expanded to more than 550 vehicles, in addition to supplies and restrooms, and the company continues to reinvest and expand. Zio has provided equipment for a lot of great productions of all sizes, including “NCIS,” “SWAT,” “The Disaster Artist,” “Lady Bird”, “Westworld”, “Captain Marvel”, “Bright,” “Transformers: Bumble Bee," “Birds of Prey (and the Fantabulous Emancipation of One Harley Quinn),” and most recently, “Space Jam 2.” For more information about Zio Studio Services, please visit http://www.ziostudioservices.com.