Ardiden 3 engine has been selected to power ZA10 electric generator. This integrated turbo-generator will deliver 500kW of electric power. 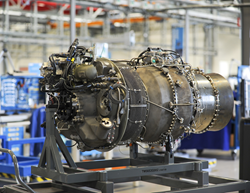 "Today marks a significant milestone on the path to delivery of the ZA10," said Matt Knapp, co-founder and CTO of Zunum Aero.

Zunum Aero, a pioneer in electric aviation, selected Safran Helicopter Engines for its hybrid-to-electric commercial aircraft, which will be available in the early 2020s. Safran Helicopter Engines will provide a new generation engine turbine to drive the Zunum ZA10’s electrical generator. This turbo-generator will power this 12-seat, hybrid-to-electric 700-mile commercial aircraft, driving extraordinarily low operating costs, offering unprecedented door-to-door travel times that are 2 to 4 times faster than today. Zunum expects to light up thirty thousand airports around the world with frequent and affordable air service.

The Zunum aircraft under development, internally dubbed the ZA10, is the first in the company’s family of regional, hybrid-to-electric aircraft. It will be powered by dual power sources: propulsion batteries, and a Safran turboshaft from the 1,700 to 2,000 shaft horsepower (shp) Ardiden range.

This new model, the Ardiden 3Z, will be used as a hybrid power source achieving demanding cost, efficiency and uptime requirements. It will be coupled with an electric generator, and the integrated turbo-generator will deliver 500kW of electric power to supplement the battery packs on key stages of flight and over long ranges. Upgrades such as advanced materials and integrated lifecycle management for hybrid service will dramatically reduce operating costs of the engine by extending the life of critical components.

The new aircraft will deliver breakthrough operating costs of 8 cents per available seat mile or $250 per hour for the aircraft, which is 60-80 percent lower than comparable conventional aircraft of comparable size. The ZA10 aircraft is designed to cruise and land on turbo-generator power alone, offering full redundancy.
Zunum’s selection of Safran is a critical step towards realizing the delivery of an economical, efficient hybrid-to-electric aircraft by the early 2020s. Because a key element of the MW-class hybrid-to-electric powertrain is a 500kW capable gas turbine that is compact, lightweight and highly efficient, to complement the propulsion batteries onboard, Safran’s proven expertise made the partnership a natural decision.

"Today marks a significant milestone on the path to delivery of the ZA10," said Matt Knapp, co-founder and CTO of Zunum Aero. "The Zunum ZA10 aircraft will bring breakthrough performance to regional aviation, paving the way to fast, electrified, affordable high-speed air services to communities everywhere.”

From ground testing to flying testbed and beyond

Near-term milestones include ground and flight testing scheduled for 2019, as well delivery of the ZA10 aircraft targeted for the early 2020s.

In preparation for flight in 2019, Zunum Aero conducted ground tests of the hybrid-electric power system at Chicago-area facilities earlier this year. Through Q4 2018 and early 2019, the power system will continue to be upgraded and tested in stages to advance it for flight. Meanwhile, the Ardiden 3Z engine will undergo ground tests in France and US, ahead of integration with the flying testbed in 2019.

Modifications of the test aircraft began on schedule for a series of flights in the back half of 2019 leading to full hybrid-to-electric conversion with the Safran engine. The flying testbed will continue to be upgraded with successive prototypes until start of certification in 2020-21.

About Zunum Aero
Zunum Aero, a pioneer in electric aviation, is building a family of commercial hybrid-to-electric aircraft designed for regional transit, with the ZA10 slated for delivery in the early 2020s. Powered by quiet range-optimized powertrain and propulsion technologies, the aircraft will contribute to 1,000-mile electric air networks to bring fast and affordable travel to every community. Founded in 2013, Zunum Aero is funded by Boeing HorizonX, JetBlue Technology Ventures and the State of Washington Clean Energy Fund. For more information visit http://www.zunum.aero, or follow zunum-aircraft on LinkedIn or @zunumaero on Twitter.

Safran is an international high-technology group, operating in the aircraft propulsion and equipment, space and defense markets. Safran has a global presence, with more than 58,000 employees and sales of 16.5 billion euros in 2017. Safran is listed on the Euronext Paris stock exchange, and is part of the CAC 40 and Euro Stoxx 50 indices. With Zodiac Aerospace, acquired by Safran in February 2018, the Group now has over 91,000 employees and will generate an estimated 21 billion euros in adjusted annual revenues (2016 pro forma figures).

Safran Helicopter Engines is the world’s leading manufacturer of helicopter engines, with more than 72,000 produced since being founded. It offers the widest range of helicopter turboshafts in the world and has more than 2,500 customers in 155 countries.