Dr. Karin Huffer, Director of Equal Access Advocates filed an Amicus Curiae (friend of the court) brief in federal court today in San Francisco before Judge Jeffrey White, requesting that he permit her to give her professional input into the case regarding whether to deny or grant state judges judicial immunity. 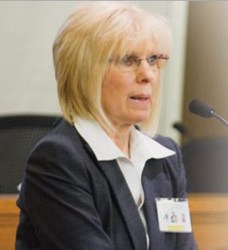 The judges ... are not disputing that they discriminated ... but argue ... that they [should be] protected by judicial immunity.

Today, the San Francisco federal court received a motion, memorandum of law, declaration and proposed amicus curiae brief of Dr. Karin Huffer who is reported as a national expert on the Americans With Disabilties Act (ADA) Title II and III sections. She states in her motion that her organization recently became aware of the lawsuit filed by David Merritt on behalf of his wife and an 83-year-old disabled woman who is allegedly being imprisoned in her home in Mt View California.

The Merritts lawsuit (Northern District of California, 13CV1391) alleges that judges Kevin Mckenney, Mark Pierce, Socrates Manoukian and Thomas Cain has conspired with local lawyers and courtroom personnel to discriminate against them due to their disabilities and retaliated for their repeated requests' in seeking disability accommodations under the ADA. The lawsuit further alleges that the judges have been preventing them from participating in court proceedings and dismissed a case that was set to go to trial March 2013. The allegations describe conversations between judges to take control of the ADA Coordinator's job in order to used that process to punish the Merritts for being effective in the California Court of Appeals when they successfully had one of their colleagues removed from their twelve million dollar predatory lending case against Bank of America, Countrywide and others.

Dr. Huffer alleges in her memorandum that her interest is neither for the Plaintiffs or Defendants but solely on the side of seeing the ADA of 2008 properly enforced. She cites the history of how the ADA came about in 1990 and how the amendments of 2008, was in response to the U.S. Supreme Court making rulings which restricted the ADA provisions. The amicus brief itself opens with it being a law that President George W. Bush signed in to law and how this case may very well be one of "first impression" in the country.

The amicus brief argues that just as the U.S. Supreme Court has ruled in Forrester vs. White, that judges cannot be afforded immunity when they take administrative acts, versus judicial acts from the bench, that the allegations in the Merritts case reflect that the four judges had also acted in an administrative role when they denied their requests for ADA accommodations. In support of this point Dr. Huffer references California Rules of Court 1.100 which mandates that all decisions related to disability accommodations are "purely administrative."

The judges, for their part, are not disputing that they discriminated against the plaintiffs, but argue that any acts that they took is protected by judicial immunity.

Motion for Leave to File AmicusMotion itself

Memo of Leave To File AmicusMemorandum of law

Judge Defendants Motion To Dismiss Based On ImmunityMotion to Dismiss