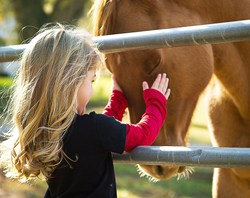 Kristin Walker of Welcome, NC won first place in the Carolina Farm Credit2013 photo contest. Her winning photo is of a cowgirl and her horse including the description, “Our horses know our secrets. We braid our tears into their manes, and whisper our hopes into their ears!"

Second place went to Amanda Hunter of Pinnacle, NC for her photo of Hallie Hunter on a springtime cruise around the farm in a vintage John Deere pedal car. Cody McCurry of Earl, NC won third place for his photo of his horses, PeeWee and Buckshot enjoying a February snow.

The contest was judged by website visitors who were allowed to vote for their three favorite pictures, once a day from July 1 - 31. A record number of over 15,500 votes were received this year (more than the combined total number of votes from the last two years). All three winners will be featured in the 2014 Carolina Farm Credit photo calendar. Walker also received a cash prize of $300, and the second and third place winners received $200 and $100.

The winning photos along with the photos that were chosen for voting can be seen here on Carolina Farm Credit’s website.

The 2014 calendar will also include photos selected from the 33 runners up. In all, more than 350 photos were submitted. This year’s collection of rural North Carolina photos includes images of kids on farms, farm animals, farm equipment, scenery, and winter snow.