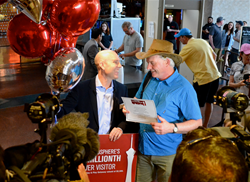 Just after 10:30 a.m. this morning, April 21, 2014, James Kennedy of Birmingham, England was surprised by Stratosphere Casino, Hotel & Tower vice president & general manager Paul Hobson at the entrance of Stratosphere Tower with balloons, an entourage of Stratosphere team members and cameras.

After informing Kennedy of the major milestone, Hobson presented Kennedy with a Stay & Play Getaway valued at $2,500.

“I am shocked,” said Kennedy. This is Kennedy’s first trip to Las Vegas, and his first visit to Stratosphere.

“It is fitting that our official 40 millionth visitor traveled across the ocean to experience the spectacular views from our iconic Tower,” said Stratosphere Casino, Hotel & Tower vice president & general manager Paul Hobson. “Stratosphere Tower is one of the ‘must see’ attractions in Las Vegas. Stratosphere Tower defines our city’s skyline.”

As the 40 millionth visitor to Stratosphere Tower, Kennedy received:

While many Tower visitors are drawn by the breathtaking views of the Las Vegas valley, others seek out the adrenaline rush. The Tower is home to an unequaled variety of thrilling rides, including Big Shot (Level 112), Insanity and X-Scream (Level 109). SkyJump Las Vegas (Level 108) is the Guinness World Record holder for highest commercial decelerator descent.

Stratosphere Tower also offers a number of dining options including the award-winning Top of the World Restaurant, Las Vegas' only continuously rotating restaurant offering 360-degree panoramic views of the Las Vegas Valley and visionary cuisine. Top of the World is recognized by critics and diners as one of the best restaurants in Las Vegas, and is frequently voted Best Place to View the City in the Las Vegas Review-Journal's Best of Las Vegas Awards. The rotating restaurant has also been awarded the Wine Spectator Award of Excellence for 17 years in a row, every year from 1996 to present.

For more information regarding ticket prices or entry to the Tower please call 800.99.TOWER or visit StratosphereHotel.com.

Opened April 30, 1996
Stands at 1,149 feet
Weighs approximately 100 million pounds
Cost approximately $80 million dollars to build
The diameter of the base of the Tower is 210 feet
The diameter of the pod of the Tower is 160 feet
Four double deck elevators travel 1,800 feet per minute at 20.5 miles per hour
Indoor observation deck on Level 108 is climate controlled with floor-to-ceiling windows
Outdoor observation deck is on Level 109
Chapel in the Clouds (844 feet above the Strip) holds more than 1,200 weddings a year

Stratosphere Tower is taller than: