To keep drivers and passengers informed, entertained and safe, NEXCOM has launched a new vehicle telematics computer, the VTC 6210. Designed for telematics, infotainment and surveillance, the VTC 6210 is a single solution that can easily help fleet managers lower equipment and operating costs. 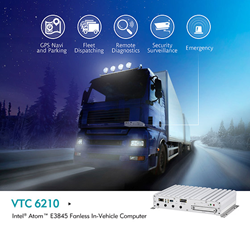 Additionally, the in-vehicle computer can be used for passenger infotainment, including on-board Wi-Fi, on-demand videos and location-based information. Using swappable HDDs, the vibration-proof VTC 6210 can provide high capacity storage at a lower cost, storing a wide variety and high volume of multimedia content and even surveillance footage if configured with security cameras.

In case of emergency or an accident, the VTC 6210 is equipped with rich interfaces to take user-defined actions. The VTC 6210 has one event button for driver's use and two DI and DO to monitor environmental events and take action even if the device is shut down. The eight channels of programmable GPIOs are also integrated onto the VTC 6210. It also provides regulated 12V power output to eliminate the need of standalone power adapter for the peripheral devices.

Founded in Taiwan in 1992, NEXCOM’s mission is to be an innovative supplier in vertical application markets. NEXCOM gains a stronghold in vertical markets with its industry leading products across five business units, including industrial computers, in-vehicle computers, multimedia, network and communication, and intelligent digital security. NEXCOM serves its customers worldwide through its subsidiaries in seven major industrial countries.