Rob Sullivan of Sullivan Law LLC, a Kansas City, Missouri based personal injury law firm specializing in catastrophic personal injury cases on behalf of individuals and families, obtained a jury verdict in favor of the victim of a boat explosion. 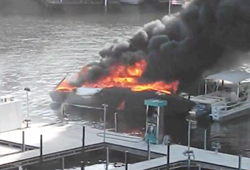 Baja 38 Special burns after the fuel hose separates while fueling at Lake of the Ozarks in Central Missouri.

It was a hard fought case. We’re just happy that Mr. Black was able to have his day in court...

Rob Sullivan of Sullivan Law LLC, a Kansas City, Missouri based personal injury law firm specializing in catastrophic personal injury cases on behalf of individuals and families, obtained a jury verdict in favor of the victim of a boat explosion. The Plaintiff, Donald Black was also represented by attorneys Timothy Morgan of Kansas City and Erik Bergmanis of Camdenton. The lawsuit, alleging negligence against Leisure Hotels LLC and negligence and strict product liability against Brunswick Corporation and Baja Marine Corporation, was filed in the Circuit Court for the 26th Judicial District, Camdenton, Missouri, Case No.: Case No. 11CM-CC00223 before the Honorable William Hass.

A Camden County jury awarded $15 million to a man who was severely burned when his boat exploded on the Lake of the Ozarks. The verdict against the boat manufacturer Baja Marine Corporation, a former member of Brunswick Corporation’s boating division, is a record award in Camden County and the highest jury verdict in a tort case so far in Missouri for 2014. Before trial, additional defendants and third party defendants settled for more that $500,000.

Mr. Black was fueling his Baja 38 Special on July 31, 2010 at the unattended marine service station at Camden on the Lake hotel and marina. During the fueling process, Mr. Black and his passenger smelled gas. After they stopped fueling, the two men began an inspection of the boat to determine if there was a leak. When the engine hatch was raised and the manual bilge pump activated, a fireball erupted out of the engine compartment, burning Mr. Black over 40% of his body. Mr. Black was able to jump onto the dock before the boat was fully engulfed in fire. The boat burned for another hour while firefighters attempted to extinguish the fire until fire suppression efforts eventually sank the boat.

Mr. Black suffered full thickness/third-degree burns over 30% of his body and deep second-degree burns over another 10%. He was life-flighted to University of Missouri Hospital in Columbia, Missouri where he spent months in treatment and recovery. Following his discharge, Mr. Black spent more than a month at Rusk Rehabilitation Center. The medical bills for his treatment amounted to more than $1.3 million.

The lawsuit alleged the Baja 38 Special was defectively designed with components that posed an unreasonable risk of fuel leaks and fire. Components of the fuel delivery system in the 2000 model year Baja 38 Special had been changed from the 1999 model year design. Among the components changed was the gas fill on the boat, the metal pipe set into the hull of the boat where a gas fuel nozzle is inserted to fuel the boat. Regulations require the fuel hose that feeds the boat’s fuel tank to be double-clamped. The lawsuit alleged that the gas fill in the 2000 model year boat failed to properly secure the fuel hose, causing it to separate during fueling and allowing as much as nineteen gallons of gasoline to be pumped into the hull of the boat instead of the fuel tank.

Sullivan said that the Defendants never offered any explanation for why the gas fill in the 38 Special was weakened from the 1999 to the 2000 model year boat. “Brunswick and Baja went from an American made part that met the certification requirements, to a foreign made part with a weaker connection that could not have met the certification requirements as designed,” Sullivan said. “From opening statement to closing argument, I asked for an explanation from the Defendants and their lawyers, but none was ever given,” he said. Through more than three years of litigation Brunswick and Baja never produced any documentation explaining the change, nor did they provide testimony from anyone at either of the companies to explain the reason the connection was weakened.

“It was a hard fought case. We’re just happy that Mr. Black was able to have his day in court, get the vindication he deserved from the jury and an award that will at least allow him some measure of comfort and additional treatment as he lives the rest of his life with these horrific injuries,” said Sullivan.

Leisure Hotels LLC, the operator of Camden on the Lake was sued for negligence. The gas dock at the marina had no attendant on duty while Mr. Black fueled the boat. It also used a type of vapor recovery nozzle that may have made contributed to the fuel hose separation. Brunswick and Baja alleged that the fire was the result of a leak in a fuel line at the marina, claiming that the fire started on the water and then spread to the engine bay of the boat, causing it to explode.

Prior to trial, Sullivan had made a $25 million global demand to Brunswick, Baja and Leisure. Brunswick and Baja never made any offer to settle and the last offer from Leisure Hotels was $750,000.

After nearly three weeks of trial, the unanimous jury found that Brunswick Corporation and Baja Marine Corporation negligently designed the boat and awarded $15 million in compensatory damages to the Plaintiff. No fault for the explosion was assessed to Plaintiff. Leisure Hotels LLC was not found liable.

About Sullivan Law LLC
The Firm is based in Kansas City, Missouri but handles serious product liability and other injury cases throughout the United States. Sullivan Law LLC provides its services free of charge unless the victim recovers compensation. To learn more, please visit http://www.sullivantrial.com or call (877) 847-2622.