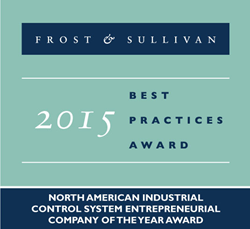 “...Bedrock Automation has designed and developed a superior system that is secure by design; promises to optimize cost, performance and ensure security; and is suitable for a variety of industrial applications and plant sizes."

Bedrock Automation, the Silicon Valley company that recently introduced its revolutionary BedrockTM universal control system, has been named Frost & Sullivan’s North American Industrial Control System Entrepreneurial Company of the Year. Bedrock received this award as recognition for bringing to market one of the most significant industrial control system advances in the past 15 years.

“Frost & Sullivan's independent analysis of the Industrial Controls Systems market clearly shows Bedrock Automation has designed and developed a superior system that is secure by design; promises to optimize cost, performance and ensure security; and is suitable for a variety of industrial applications and plant sizes. The system is truly simple, scalable and secure,” said Piyush Dewangan, industry analyst at Frost & Sullivan.

Frost & Sullivan analysts recommended Bedrock Automation for the award based on an in-depth benchmark study. A complete copy the Frost & Sullivan research report is available at http://bit.ly/1JMH93u. The following excerpts highlight the findings:

“We started out with a blank sheet of paper and a commitment to rethink industrial control technology from the silicon on up. With deep roots in both automation and semiconductors, and unburdened by legacy, we have created not only the most cyber secure system available today, but have also established new benchmarks for performance, scalability and affordability. We are very proud that Frost & Sullivan has recognized this achievement,” said Bedrock Automation President Bob Honor.

About Bedrock Automation
Bedrock Automation, based in San Jose, California, is the maker of Bedrock™, the world’s most powerful and cyber secure automation platform. This Silicon Valley company has assembled the latest technologies and talents from both the automation and semiconductor industries to build an unprecedented automation solution for industrial control based on three prime directives: simplicity, scalability and security. The result is a system with a revolutionary electromagnetic backplane architecture and deeply embedded cyber security, which delivers the highest levels of system performance, industrial cyber security and reliability at the lowest cost of ownership.