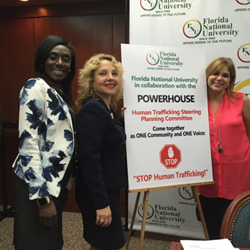 Florida National University and the Dr. Jose Regueiro Foundation, INC. has assembled a Powerhouse committee consisting of local and national law enforcement agencies along with private and non-profit

Let's all be part of the solution to end these horrific crimes.

According to the Department of Homeland Security, “Human trafficking is a modern-day form of slavery involving the illegal trade of people for exploitation or commercial gain.” Anyone can be a victim of this modern form of slavery: men, women, and children (some as young as 11 years of age) are the victims of human trafficking, and it is becoming an increasing prevalent problem on the local, national, and global level!

Let's all be part of the solution to end this horrific crimes!