Carnegie Council is pleased to announce the publication of the second issue in "Ethics & International Affairs'" 30th anniversary volume, featuring a roundtable on the role of human rights in the UN’s post-2015 development agenda, an essay on humanitarian drones, and more. 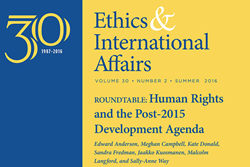 Ethics & International Affairs is pleased to announce the publication of the second issue in EIA's 30th anniversary volume.

Carnegie Council for Ethics in International Affairs is pleased to announce the publication of the second issue in "Ethics & International Affairs'" 30th anniversary volume. The issue features a roundtable on the role of human rights in the UN’s post-2015 development agenda, an essay on humanitarian drones, and more.

To access it, go to http://www.ethicsandinternationalaffairs.org/. The entire issue is free online for a limited time.

The Possibilities and Pitfalls of Humanitarian Drones
John R. Emery
The debate about drones has been slow to shift from targeted killings to the emerging category of the humanitarian drone. As technology and innovations advance, there remain critical ethical tensions associated with drones, even in their humanitarian use.

Equality as a Global Goal
Edward Anderson
The Millennium Development Goals were often criticized for having a "blind spot" with regard to inequality and social injustice—possibly even contributing to entrenched inequalities. This essay examines the extent to which this criticism has been addressed in the Sustainable Development Goals.

Accountability for the Sustainable Development Goals: A Lost Opportunity?
Kate Donald and Sally-Anne Way
This essay examines how the "politics of accountability" played out during the post-2015 negotiations on the SDGs and how this influenced the resulting compromise in the final outcome document.

Rethinking Central Bank Accountability in Uncertain Times
Jacqueline Best
Central banks have gained considerable authority since the 2008 financial crisis, using highly unorthodox tools to stimulate the economy and taking a greater role in financial regulation. In such a context, we need to develop a more robust form of accountability.

Should We Take the "Human" Out of Human Rights? Human Dignity in a Corporate World
Cristina Lafont
Recognizing corporations as legal persons with human rights may have a detrimental effect on the human rights of natural persons. If this legal development continues, human rights practice may be facing two incommensurable paths.

EXCHANGE: DEMOCRACIES AND THE POWER TO REVOKE CITIZENSHIP

When Democracies Denationalize: The Epistemological Case against Revoking Citizenship
Elizabeth F. Cohen
What makes denationalization problematic for democratic theorists are not simply the procedures used to impose this penalty or its consequences, but also the permanence of this type of punishment.

The Democratic Roots of Expatriation
Ben Herzog
Patti Tamara Lenard's analysis of the right to revoke citizenship in democratic states overlooks one legitimate motivation behind expatriation: the aim to regulate national allegiance.

Democracy, Exile, and Revocation
David Miller
For those who set their faces against the implicit contract that democracy embodies, revocation procedures incorporating strong human rights safeguards may still be justified.

Founded by Andrew Carnegie in 1914, Carnegie Council for Ethics in International Affairs is an educational, nonprofit, nonpartisan organization that produces lectures, publications, and multimedia materials on the ethical challenges of living in a globalized world. For more information, go to http://www.carnegiecouncil.org.