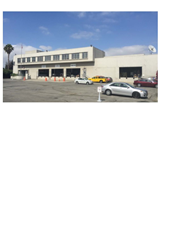 Hackman Capital Partners LLC announced today the purchase of a two-story, 74,000-square-foot building at 5500 West Jefferson Boulevard, located in West Los Angeles, California, on the eastern border of Culver City. The property was purchased from owner/user Modern Props, Inc., which designs and fabricates furniture and high-tech props for major studios and production companies in the entertainment industry. Hackman Capital plans to redevelop the property for creative-office use, a strategy for urban infill markets that has proven successful for the company.

“The acquisition perfectly reflects our strategy of purchasing properties in infill locations with the ability to reposition them for higher and better uses,” said Michael Hackman, founder and CEO of Hackman Capital Partners. “The area is thriving as a destination for multi-media and other creative businesses, especially now with the Exposition Light Rail Line’s expansion to Santa Monica.”

Hackman Capital is no stranger to the area’s revitalization. Through its affiliates, the real estate investment and operating company has already converted seven industrial warehouses in Culver City to creative-office campuses, now home to Westwood One Studios and Apple Computer’s Beats by Dre headquarters. In 2014, Hackman Capital also acquired The Culver Studios, the iconic movie studio sitting on 14.3 acres in city’s coveted downtown.

According to Hackman, the property at 5500 Jefferson Boulevard is ideal for creative-office redevelopment. The location, immediately adjacent to the Metro’s La Cienega/Jefferson stop, will be a draw for commuting employees, while the building itself offers an open floor plate, tall ceilings and an original saw tooth roof. There also is 2.3 acres of excess land that provides the ability to construct an additional 177,345 square feet of rentable space to further maximize value at the property.