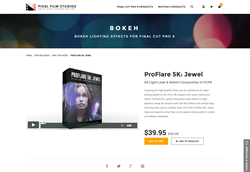 ProFlare 5K Jewel can be utilized for HD to 5k films without any loss in quality in any linear editing software. This outstanding 5k light leak and flare collection contains such a high-resolution, it can be used for photo prints too.

Pixel Film Studios has a special place in our hearts for the Final Cut Pro X Users out there. And because of that, included is a special tool for manipulating and tweaking the flare footage to perfection. Gamma, brightness, and color tweaking made easy.