BGV recently named John Liner as the new VP of Sales while celebrating his team’s monumental achievements in 2017 including the company’s best month of sales to date and one of the most successful first quarters in BGV history. 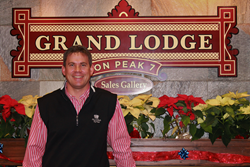 Liner joined the BGV family in October 2010 as the In-House Director of Sales and has been an integral part of the company’s success. The company has increased annual revenue by more than 35% since he came on board.

Prior to BGV, John was a Regional Sales Director for Diamond Resorts International for more than 12 years working in Sedona and Scottsdale, Arizona and Maui, Hawaii.

Liner’s leadership skills were tested at a young age as he was leading Platoons and becoming Company Executive officer in two different battalions of the U.S. Army. He served a total of 4 years in the 18th Airborne Corps out of Fort Bragg, NC and went on to become a Jumpmaster after graduating from Northern Arizona University.

John possesses an immense passion for timeshare and the key traits necessary to lead teams to new heights. In John’s first four months of company leadership, he has effectively guided the team to one of the most lucrative first quarters ever experienced, anchored by the company’s best ever month of sales at $10.6 million+ of revenue in March 2017.

When asked about what he was most excited for in becoming the VP of Sales, John said, "I'd like to thank all those who have supported sales in so many ways for so many years. As I step into an even bigger role, I intend to always lead by following one of George Patton's philosophies, "Instead of telling people how to do things, ask them what to do and watch them surprise you with their ingenuity!"

Liner’s passions outside of work find him enjoying the amazing mountain lifestyle in Colorado with his family while traveling extensively through his personal timeshare ownerships all over the world.

ABOUT BRECKENRIDGE GRAND VACATIONS: Created in 1984, Breckenridge Grand Vacations (BGV) was built by brothers Mike and Rob Millisor and friend Mike Dudick upon the belief that the success of their company would be determined by the positive impact it had on their owners and guests, employees and the community. The developers of the company also embraced the concept that BGV would be the best in sales if they were first and foremost the best in customer service. The company has embraced the Net Promoter methodology company-wide and consistently beats industry averages with its high scores. BGV now creates Grand vacations for over 23,000 owners and employs over 500 staff members.