On May 17, 2017, during the Annual Spring Reception - Festa della Primavera - in New York City, the American Foundation of Savoy Orders awarded the fifth annual Chivalry Award to Her Excellency Vicki Downey DGCHS, Lieutenant and head of the Equestrian Order of the Holy Sepulchre of Jerusalem in the Eastern United States. The Chivalry Award recognized her outstanding commitment to humanitarian causes in the Holy Land and in the United States, and her leadership, public service and extraordinary integrity. 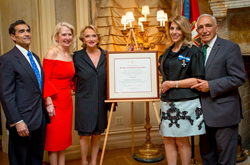 The Chivalry Award is a humanitarian award that celebrates the vision and endeavor of an individual, whose charitable work, public service and exemplary conduct have contributed significantly to the betterment of the community and world.

The American Foundation of Savoy Orders, Incorporated http://www.savoia.org awarded the fifth annual Chivalry Award to Her Excellency Vicki Downey DGCHS, Lieutenant and head of the Equestrian Order of the Holy Sepulchre of Jerusalem in the Eastern United States, in recognition of her outstanding commitment to humanitarian causes in the Holy Land and here in the United States and for her leadership, public service and extraordinary integrity. The Chivalry Award recognizes those who carry forth the humanitarian and hospitaller mission of the centuries-old Savoy Orders. The Award was presented during the Savoy Foundation’s annual spring event - Festa della Primavera - at the Columbus Citizens Foundation on the evening of May 17, 2017, where over 100 guests and dignitaries saluted and hailed her achievements. Proceeds benefited the Savoy Foundation’s Emergency Response Fund for victims of natural disasters. The Chair of the event was Vivian Cardia. The Chivalry Award is conferred annually by the Board of Directors of The American Foundation of Savoy Orders, Incorporated.

Vicki Downey is the first woman to head the Holy Sepulchre Order in the Eastern Lieutenancy. As Lieutenant, she is involved in directing critical support to the institutional activities of the Latin Patriarchate of Jerusalem, including pastoral care, maintenance of clergy, support of the seminary, construction and maintenance of parish churches and school buildings, and subsidy of school operations, among others. Most recently she has been working closely with The Halo Trust, a land mine clearing organization, to raise awareness of the hundreds of land mines that still pose a threat in Palestine, especially around the Baptismal Site of Christ. Under her guidance, the Eastern Lieutenancy continues to advocate for the preservation of the holy places and the Christian presence in the Holy Land through its financial support and pilgrimages.

Joseph Sciame, President of the Savoy Foundation stated: “The selection of her Excellency Dame Vicki Downey, DGCHS by the Savoy Foundation Board of Directors has brought great favor with our members of the Savoy Orders for a variety of reasons. The Chivalry Award honors significant persons who have not only achieved personal success but who are public role models. The impact of Her Excellency Vicky Downey’s work as head of the Order of the Holy Sepulchre in the Eastern United States has focused on international human rights advocacy for Christian populations living in the Middle East. Under her leadership, the Order of the Holy Sepulchre aids Christians in the Holy Land to achieve educational and professional standards in their own country, at a level equal to people of other faiths. We are happy to recognize her with our annual Chivalry Award. We congratulate her and wish her well in all of her activities, especially in her leadership role in the Order of the Holy Sepulchre.”

About the Chivalry Award

The Chivalry Awards were inaugurated by the Savoy Foundation in 2013. The Chivalry Award is a humanitarian award that celebrates the vision and endeavor of an individual, whose humanitarian work, public service and exemplary conduct have contributed significantly to the betterment of the community and world. Its goal is to bring public recognition to individuals whose principles, values, civil conduct and humanitarian accomplishments provide inspiration to future generations. The Chivalry Awards are meant to focus greater attention on standards of knightly conduct, which history associates with Europe in the Middle Ages. Even today, the word “chivalry” is synonymous with courtesy, honor and integrity. Chivalry survives in modern times as both a code of conduct and a way of life, embodying the highest ideals of civilization. Honorees for these awards are selected in recognition of their outstanding service, generosity and civility in their distinguished careers and their unselfish commitment to public causes and personal dignity, which reflect the noble and ancient chivalric traditions of the Dynastic and Hereditary Orders of the Royal House of Savoy. For more information about the Chivalry Awards or prior recipients, please visit http://www.prweb.com/releases/2013/4/prweb10606064.htm and http://www.savoia.org.

The American Foundation of Savoy Orders, Incorporated, a U.S. charitable 501(C) (3) organization, is an NGO in Roster Consultative Status with the Economic and Social Council of the United Nations. It has three endowments: charitable causes, educational programs and an operating fund. Its Savoy Orders Pigott Scholarship was established to provide financial aid to students in the humanities and international studies.

In order to raise funds for the support of its activities, the Savoy Foundation sponsors a winter event, Savoy Ball of New York (Ballo di Savoia)
(http://www.prweb.com/releases/2016/12/prweb13924916.htm) and a spring event, Festa della Primavera. Members of the Italian Royal Family, headed by His Royal Highness, Prince Victor Emmanuel of Savoy, actively support, attend and lend their names through formal patronage of these Savoy Foundation events. For more information, visit http://www.savoia.org.

About The American Delegation of Savoy Orders

The American Delegation of Savoy Orders, which includes the United States of America and Canada, is a part of the Dynastic Orders of the Royal House of Savoy, among the oldest orders of chivalry in the world. The Savoy Orders are headquartered in Geneva, Switzerland and have 35 Delegations worldwide that support the ongoing charitable works of these ancient Dynastic Orders of Knighthood and Merit. Their origins and their principles, traditions and humanitarian goals date back a thousand years. HRH Prince Victor Emmanuel, Prince of Naples and Duke of Savoy, is Head of the House of Savoy and Grand Master of the Savoy Orders. His ancestor, King Victor Emmanuel II, united the nation of Italy under his rule between 1861 and 1870 and the Prince’s father, King Umberto II was Italy’s last reigning sovereign. He died in 1983.

Savoy Foundation Chairman of the Board Carl J. Morelli, Esq., Nancy Sakas, H.E. Vicki Downey and Secretary of the Board Jeffrey Ryan

Salvatore and Lisa Salibello with Paul and Janet Vitale