Breaking all the rules and exceeding all expectations, new country music writer/singer Randall Lee Richards has a hit single "A Paradise Life" impacting the airwaves all around the world. Riding the wave of an edgy new country music trend. 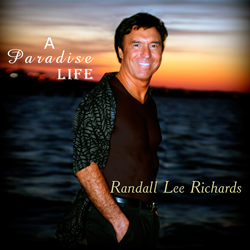 One music critic has said "Randall Lee Richards music has more hooks than a pirates convention!"

How did a new artist without a major label, release his first single and get 225,000+ You Tube views, over 35,000 Internet streams on I Tunes, Pandora, Spotify, Jango, etc, radio airplay on nearly 1,000 radio stations across America and in over 40 countries, to become the hottest new country music star, all in less than 3 months?

Perhaps it’s as simple as two words. Great music. Randall Lee reflects, “I think it helps that I have written songs which were recorded by major artists, and which sold millions of copies, but in the end, I’m sure it’s the power of this song “A Paradise Life” that’s making a way for me as an artist.” “It’s super catchy, and relates to just about everyone.” It helps that Randall Lee has tapped into the super hot trend called New Country Music.

“The best thing about all this is that I have many more great songs waiting to follow this one.” In fact, he’s currently finishing an LP being recorded in Nashville with top producer Stacy Hogan (Universal Records/Curb Records) and all top studio musicians. It will have 14 songs and is scheduled for a November release.

In Australia right now, “A Paradise Life” is being played heavily on virtually every radio station in that country. The official UK release is August 1st.

MPE, a music delivery service listed “A Paradise Life” recently as #11 in downloads, and #16 in streams worldwide. That is ahead of many major stars with major labels.

Over the last several weeks, the song has also been one of the top most added singles to country radio stations across America.

Randall Lee has also written a beautiful love song duet which a major country female star is slated to sing with him for the LP. Many people say Randall Lee’s music is closest to Keith Urban, who has pioneered a new country sound in recent years. Randall Lee Richards is certainly on the edge of becoming a true singing sensation, also with his own distinctly new country sound. Just maybe there is still a chance for a singer’s dreams to come true even without a “Major Label.” As they say, stay tuned.