Trash and Recycle Bin Cleaning Service Exploding in N. Texas and Around the Country

Dallas-based GLEAM Trash and Recycle Bin Cleaning Services is experiencing rapid growth as demand for their service continues to grow. Already expanding to other, out of state markets. 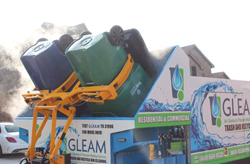 We have signed up hundreds of customers in North Texas and expanded our fleet from that first truck to what will be seven within the next 30 days.

Last summer, André van den Broeck took a half eaten ice cream cone from his daughter and, without even thinking, opened the lid to their trash bin and threw the ice cream in it…un-bagged. After 2 days in the Texas heat, that bin became infested with maggots and the smell was unbearable.

van den Broeck said, "I wheeled the bin into my driveway to clean it and I thought to myself that there had to be someone out there who offered this service. I searched, with the intent of becoming a customer and, to my surprise, I couldn't find anyone. Four weeks later, I had my first truck delivered to my house."

Using the winter months to establish his brand, van den Broeck didn't begin truly marketing his company until February of this year. Since then? "We have signed up hundreds of customers in North Texas and expanded our fleet from that first truck to what will be seven within the next 30 days. We anticipate having twelve trucks serving all of North Texas and other markets by the end of the year," van den Broeck says.

Two trucks are headed to the Pittsburgh area and one to Colorado Springs. GLEAM is receiving several inquiries per week from people interested in franchising their business in other markets. To say that people are interested in GLEAM would be an understatement. According to Marcus Johnson, the CEO of the company, Good Morning Texas invited them to be on their show and pretty quickly after the segment aired, they got a notice that their site was at risk of crashing because of the influx of traffic it was receiving.

Johnson stated, "The best thing about our service is that it actually works. We use high pressure water at temperatures of nearly 200 degrees. This allows us to be massively effective in eliminating the E.Coli, Salmonella, Staph and other terrible bacteria commonly found in bins, without having to use any chemicals whatsoever. We receive comments from our customers every day saying that their trash bins look brand new and smell better than they ever thought they could. most of our customers are signing up for once-a-month service and we come in behind their trash and recycle service. There is value in convenience and we are grateful that our customers value our service."

van den Broeck says that GLEAM will be able to service all of DFW as soon as a couple of their next trucks deliver and the plan is to continue growing in their home region while expanding via franchisees across the country.

To learn more about GLEAM, visit their website at http://www.gleampressurewashing.com.