Several book signings scheduled in Northeast Florida to promote the launch of the new book through year-end, with free shipping during presale for one or all in the Parker Glynn series through September 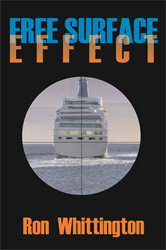 With al-Qaeda, and now ISIS, still in the news, these stories are very relevant when it comes to today’s headlines. I just hope we have a lot of Parker Glynns out there looking out for us.

In Free Surface Effect, the honeymooning nephew of Glynn’s spy chief goes missing in the Turks and Caicos and a twisted criminal torturer, Diego Delgado, puts a double-agent under wraps – prompting Homeland Security’s H.I.4 Division to call in Parker Glynn to investigate. Glynn soon finds himself in the middle of an al-Qaeda plot to cripple strategic U.S. ports and kill thousands in the process – and as the only person who can stop the plot, and thwart Delgado’s secret personal vendetta against his native country and America.

“I created this character as an everyman who has a personal stake in fighting terrorism, and I’m excited about where Parker’s story is progressing,” Whittington said. “With al-Qaeda, and now ISIS, still in the news, these stories are very relevant when it comes to today’s headlines. I just hope we have a lot of Parker Glynns out there looking out for us.”

Book signings are also scheduled from 4 to 6 p.m. Friday, Aug. 25 at American Legion Post 129, 1151 4th St. South in Jacksonville Beach (with a portion of the proceeds benefiting the legion’s building fund) and from 5 to 8 p.m. Wednesday, Sept. 6 at Chamblin’s Uptown Café, located at 215 Laura St. in Jacksonville during ArtWalk.

Free Surface Effect was published by Ingram Books, edited by Marlene Dryden and the cover art was created by Jacksonville artist and graphic designer Robert Conrad.

Whittington started his career as a journalist with CNN Radio and the Dallas-Fort Worth Business Journal before going into the public relations profession. Over the last 30 years, he has also worked as a ghostwriter on two national best-selling books and his freelance writing has appeared in national publications including Texas Business, Texas Monthly, Jacksonville Magazine, Beson Publications, The St. Augustine Record and The Florida Times-Union.

A native of Atlanta, Whittington lived in Dallas for 10 years and now resides in Jacksonville Beach, Florida.

Businessman Parker Glynn loses his wife and child at the Twin Towers on 9/11 and goes underground, only to uncover a terror plot aimed at Jacksonville Florida in the fiction book Second Strike.