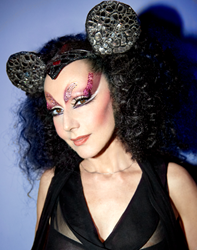 It is an exemplary event which celebrates all forms of creative 'culture' from music, to fashion, film to art and keeps your imagination wondering.

Susanne Bartsch, the iconic New York nightlife event producer whose outlandish, over-the-top parties have united the couture and the avant-garde, will present the “Art-A-Porter” as part of the GLBX Council of the Greater Fort Lauderdale Chamber of Commerce’s fourth annual ARTOPIA presented by JM Lexus. During this art-inspired evening on Saturday, September 23 from 7 to 10 p.m. at The Galleria at Fort Lauderdale, over-the-top entertainment, live artist experiences and visual arts and interactive elements will merge to create an artrageous spectacle.

“Art-A-Porter,” created by Susanne Bartsch and sponsored by the Greater Fort Lauderdale’s Film, Music, Fashion & Create division of the Greater Fort Lauderdale Convention and Visitors Bureau, will be a centerpiece of human art, outlandish couture and unconventional personalities of the type that have been featured at her parties for more than three decades. Emerging fashion designers from New York City will strike a pose as models of their own cutting-edge couture. Each artist is their own designer, dresser and make-up artist unto themselves. This living art piece will include movements and motion set to music based on the character and style of each fashion artist. Once onstage, they will form an unusual and surprising tableau of human “Art-A-Porter” as envisioned by Susanne.

“We are thrilled to welcome ARTOPIA for its fourth consecutive year in Fort Lauderdale. It is an exemplary event which celebrates all forms of creative “culture” from music, to fashion, film to art and keeps your imagination wondering. This is the genre of events we love to see emerge in Broward County and very much complements our Underground Create brand and efforts, which focus on the universe of all creative cultures in the destination,” says Noelle P. Stevenson, Vice President of the Greater Fort Lauderdale Convention & Visitors Bureau’s Film, Music, Fashion & Create division.

Susanne Bartsch is known as New York City’s patron saint of transformation and inclusion. The parties she’s thrown for three decades—from Paris to Tokyo—have provided a venue for countless creative souls and “creatures” to express themselves, come together and forget the hum-drum of the everyday. As Michael Schulman wrote in his 2013 New York Times profile, “Susanne’s “empire” continues to flourish “particularly among scene seekers too green to know her history. Wherever Ms. Bartsch goes, the demimonde seems to follow, as if summoned by the bat of her curlicued fake eyelashes.”

Susanne has become notorious for the beautiful, strange and outlandishly dressed people who flock to her events, for clients such as Dewar's, Sony and Barneys at venues like The Soho Grand Hotel, Le Bain and The Top of The Standard. "Ms. Bartsch's name," wrote The New York Times, "is the equivalent of a couture label." The colorful crowd has followed her for 3 decades and still gathers at her current weekly bashes in New York and special events around the world.

“The GLBX is excited to grow ARTOPIA which continues to evolve and transform Fort Lauderdale’s art scene,” said Devin MacLachlan, event chair for ARTOPIA. “Now in its fourth year, ARTOPIA is enjoying a surge of popularity for its daring approach and appeal to anyone who connects with art in its purest form.”

Tickets and additional information are available online at http://www.GLBX.org. To learn how you or your business can get involved, please contact Andy Perrott at (954) 621-1350 or andy(at)lightshiptv.com.

The Gay & Lesbian Business Exchange (GLBX), a council of the Greater Fort Lauderdale Chamber of Commerce, is Broward County's premiere gay-friendly networking organization, maximizing our members’ business profitability. The Greater Fort Lauderdale Chamber of Commerce is the first Chamber in the state of Florida and one of the first in the nation to recognize the LGBT community as a major component of their membership. The contributions of the gay and lesbian business community within our city and surrounding area is major driver to our local economy. For more information, visit http://www.ftlchamber.com/GLBX.