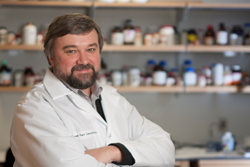 What’s unique about Mobilan is that this viral vector, when injected into the tumor, appears to direct against the tumor the power of antibacterial immune defense, thus turning tumor cells into a therapeutic cancer vaccine.

One of the most important areas of cancer research today involves efforts to expand the benefits of immunotherapy to more patients. Research conducted by scientists at Roswell Park Cancer Institute in cooperation with Panacela Labs LLC, a subsidiary of Cleveland BioLabs Inc. (Nasdaq: CBLI), introduces a new class of immunotherapy and proposes a strategy for increasing the number of patients who are likely to benefit from this new approach. The team’s efforts, reported in a study published online ahead of print in the journal Oncogene, involve the innate immunity receptor TLR5.

The researchers hypothesized that forcing a tumor to activate signaling through Toll-like receptor 5 (TLR5), a protein whose natural functions include recognition of and response to salmonella and other pathogenic bacteria, would attract and stimulate innate immune responses capable of both suppressing primary tumor growth and providing long-term protection against metastasis and recurrent tumors. To test this approach, they engineered a recombinant adenovirus for intratumoral injection, named Mobilan M-VM3, that forces tumor cells to produce a self-activating cassette consisting of TLR5 and its agonist, which mimics the salmonella protein flagellin. They then assessed the efficacy of Mobilan in animal models of prostate cancer and ex vivo in human prostate tumor cells.

“What’s unique about Mobilan is that this viral vector, when injected into the tumor, appears to direct against the tumor the power of antibacterial immune defense, thus turning tumor cells into a therapeutic cancer vaccine,” notes the paper’s senior author, Andrei Gudkov, PhD, DSci, Senior Vice President of Basic Science and the Garman Family Chair in Cell Stress Biology at Roswell Park and Chief Scientific Officer at both Cleveland BioLabs and Panacela Labs. “In this early-phase preclinical study, we found that vaccination with Mobilan had the desired effects, protecting against both additional tumor growth and the development of new tumors.”

The first two clinical trials of Mobilan, in patients with prostate cancer (ClinicalTrials.gov identifiers NCT02654938 and NCT02844699), are underway at multiple centers in Russia, sponsored by Panacela Labs. The researchers expect that use of TLR5-targeting therapies will cause significantly fewer and less serious side effects than many other types of immunostimulatory agents known to induce acute systemic inflammation in some patients.

The authors plan to develop next-generation formulations of Mobilan to explore the possibility of achieving greater antitumor effects by combining these agents with immune checkpoint inhibitors.

The study, “Mobilan: a recombinant adenovirus carrying Toll-like receptor 5 self-activating cassette for cancer immunotherapy,” is available at nature.com/onc. This work was supported by a contract from Panacela Labs and by grants from the Roswell Park Alliance Foundation, National Cancer Institute (award no. P30CA016056, the NCI’s core grant to Roswell Park) and U.S. Department of Defense (award no. W81XWH-15-1-0081).

This release is also available on the Roswell Park website: https://www.roswellpark.org/media/news/viral-vector-mobilan-offers-new-approach-cancer-immunotherapy

The mission of Roswell Park Cancer Institute (RPCI) is to understand, prevent and cure cancer. Founded in 1898, RPCI is one of the first cancer centers in the country to be named a National Cancer Institute-designated comprehensive cancer center and remains the only facility with this designation in Upstate New York. The Institute is a member of the prestigious National Comprehensive Cancer Network, an alliance of the nation’s leading cancer centers; maintains affiliate sites; and is a partner in national and international collaborative programs. For more information, visit http://www.roswellpark.org, call 1-877-ASK-RPCI (1-877-275-7724) or email askrpci(at)roswellpark(dot)org. Follow Roswell Park on Facebook and Twitter.