The 20th Anniversary Ballo di Savoia (Savoy Ball) Benefit Gala, hosted by the American Foundation of Savoy Orders, was held on Saturday, December 9, 2017 in New York City. Guests of honor, H.R.H. Prince Emmanuel Philibert of Savoy and H.R.H. Prince Dimitri of Yugoslavia, together with 300 patrons, benefactors and guests, raised funds to provide service dogs for disabled American war veterans suffering from Post Traumatic Stress Syndrome and for victims of hurricanes in Texas, Florida and Puerto Rico and earthquakes in in central Italy. 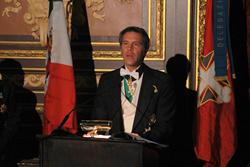 I am grateful to all the members of the American Delegation of Savoy Orders and their guests this evening, for your effort in supporting the charitable causes of the Savoy Orders that will benefit from the funds raised tonight for the needs of Veterans who have served so well.

On Saturday evening December 9, 2017, the American Foundation of Savoy Orders held its annual charity event, the Ballo di Savoia (Savoy Ball). His Royal Highness Prince Emmanuel Philibert of Savoy, Prince of Venice and his cousin His Royal Highness Prince Dimitri of Yugoslavia were guests of honor. The Ball was part of a four day weekend of events organized by the American Delegation of Savoy Orders and the Savoy Foundation, continuing the spirit and tradition of charitable giving and hospitaller care of the historic dynastic orders of knighthood and merit of the thousand year Royal House of Savoy.

The festive evening included an elegant reception, a beautifully presented gourmet dinner, Viennese dessert stations, music, dancing, and raffle gifts. Hundreds of supporters attended the white-tie affair. The Ball is the Savoy Foundation’s largest fundraiser and helps provide the resources needed to continue its year-round mission of assisting disabled war veterans, emergency relief aid, educational initiatives, scholarship programs and other charitable initiatives. Prior to Saturday’s evening Gala, a private reception for the Patrons and Benefactors was held on Thursday evening, December 7 at the Lotos Club followed by a welcome reception for guests attending the Savoy Ball on Friday evening, December 8 at the Knickerbocker Club.

The 20th anniversary Savoy Ball of New York was a much anticipated white-tie event. The gala soirée was hosted by the American Foundation of Savoy Orders, Incorporated and was under the patronage of Their Royal Highnesses Prince Victor Emmanuel and Princess Marina of Savoy. Prince Victor Emmanuel is the son and Prince Emmanuel Philibert is a grandson of the last King of Italy, Umberto II. Prince Victor Emmanuel is also the Grand Master of the Dynastic Orders of the Royal House of Savoy. Prince Dimitri is the son of Prince Alexander of Yugoslavia and his first wife, Princess Maria Pia of Savoy, the eldest daughter of King Umberto II of Italy.

The Savoy Foundation is supported by 200 knights and dames in the United States and Canada who are members of the American Delegation of Savoy Orders, which is part of the historic dynastic and chivalric Orders of the thousand year Royal House of Savoy, which united Italy as a kingdom between 1861 and 1871. The Savoy Foundation, whose mission is to serve “the poor and the sick,” raises funds for humanitarian projects. The ball benefited the VetDogs PTSD Service Dog Program for disabled American war veterans and the Savoy Foundation’s disaster relief fund.

Due in large part to funds raised at the Gala, the Savoy Foundation is able to continue to support humanitarian projects, including a children's causes, veterans programs, disaster relief for earthquake and flood victims and scholarships for college students. During his speech, Prince Emmanuel Philibert said: “I am grateful to all the members of the American Delegation of Savoy Orders and their guests this evening, for your effort in supporting the charitable causes of the Orders that will benefit from the funds raised tonight for the needs of Veterans who have served so well. The fact that you are by your generosity so effectively supporting charitable works in your community and throughout the world, gives me great happiness, since these excellent endeavors are being carried out in the name and traditions of the Royal House of Savoy.”

Next year’s ball is scheduled for Saturday, December 8, 2018, at the Metropolitan Club. In New York City.

About The American Foundation of Savoy Orders, Incorporated
The American Foundation of Savoy Orders, Incorporated, a U.S. charitable 501(c) (3) organization, is a NGO in Roster Consultative Status with the Economic and Social Council of the United Nations. It has three endowments: charitable causes, educational programs and an operating fund. Its Savoy Orders Pigott Scholarship was established to provide financial aid to students in the humanities and international studies. Annual grants are also made to educational programs, hospice care facilities, orphanages and programs supporting disabled veterans. (http://www.prweb.com/releases/2017/02/prweb14075469.htm)

In order to raise funds for the support of its activities, the Savoy Foundation sponsors a winter event, Savoy Ball of New York (Ballo di Savoia) (http://www.prweb.com/releases/2016/12/prweb13924916.htm) and a spring event, Festa della Primavera. It also confers an annual Chivalry Award, which honors individuals whose humanitarian work, public service and exemplary conduct have contributed significantly to the betterment of the community and world. Its goal is to bring public recognition to individuals whose principles, values, civil conduct and humanitarian accomplishments provide inspiration to current and future generations. http://www.prweb.com/releases/2017/05/prweb14364352.htm

Members of the Italian Royal Family, headed by His Royal Highness Prince Victor Emmanuel of Savoy, actively support, attend and lend their names through formal patronage of these Savoy Foundation events.

About The American Delegation of Savoy Orders
The American Delegation of Savoy Orders, which includes the United States of America and Canada, is a part of the Dynastic Orders of the Royal House of Savoy, among the oldest orders of chivalry in the world. The Savoy Orders are headquartered in Geneva, Switzerland and have 35 Delegations worldwide that support the ongoing charitable works of these ancient Dynastic Orders of Knighthood and Merit. Their origins and their principles, traditions and humanitarian goals date back a thousand years. HRH Prince Victor Emmanuel, Prince of Naples and Duke of Savoy, is Head of the House of Savoy and Grand Master of the Savoy Orders, He is the great, great grandson of King Victor Emmanuel II, Italy’s first reigning sovereign, who united the nation of Italy under his rule between 1861 and 1870. The Prince’s father, King Umberto II, was Italy’s last reigning sovereign. He died in 1983.