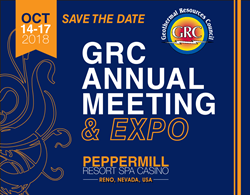 Just before the start of the GRC Annual Meeting & Expo, the GRC Annual Charity Golf Tournament will take place October 14 at the Sunridge Golf Club in Carson City, south of Reno. Registration for the tournament is now open.

This year the proceeds from the tournament will go to the GRC Scholarship Fund. Last year the event helped to support six students in the geothermal energy community.

At 4,700 feet elevation, the Sunridge Golf course is a pleasure for golfers of any skill level to play. The course will challenge you while providing a relaxing, picturesque backdrop of the Sierra Nevada.

More details of the tournament can be found on the GRC website at http://www.geothermal.org. Download the GRC Annual Charity Golf Tournament Brochure and fill out a registration form which can be mailed or faxed to the GRC office. Online registration is also available.

Registration to the GRC Annual Meeting & Expo will open soon. Room reservations can now be made on the GRC website at http://www.geothermal.org. A discounted room rate is available until September 19, so early reservations are recommended.
For more information about the GRC Annual Meeting & Expo in Reno, Nevada, USA, visit http://www.geothermal.org or call (530) 758-2360.

The Geothermal Resources Council (GRC) will be celebrating 50 years of service to the global geothermal energy community in 2021. The GRC is dedicated to advancing geothermal development around the world through education, research, and outreach. For more information, please visit http://www.geothermal.org.