May 8, 2019, Three Brothers Bakery and owners Janice & Bobby Jucker will celebrate 70 years of making memories for Houstonians with 5 different events all on the heels of returning from Washington, D.C. where the owners appealed to lawmakers for policy changes to help small businesses survive natural disasters. 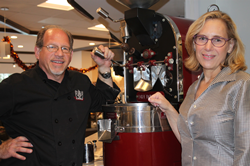 “Our next decade will focus on growth and advocating for reforms to help more small businesses survive these catastrophic events,” said 5th generation baker, Bobby Jucker.

For most businesses a 70th anniversary would be enough for one day, but for Three Brothers Bakery May 8th, 2019, will be jam packed with 4 different events and a cookie sale.

Three Brothers Bakery was on a growth trajectory after adding stores in 2012 and 2014. That growth was put on hold as three floods in less than three years decimated the area they serve in 2015, 2016 and 2017. The last was Hurricane Harvey and proved to be the hardest recovery both physically and economically. The bakery’s recovery efforts did not go unnoticed. After receiving a disaster loan from the SBA, they went on to be given a SBA Phoenix Award for Small Business Disaster Recovery in 2018. While in Washington, D.C. accepting their award, the Juckers met the team from VISA, and it was their story which inspired VISA to put a spotlight on small business resiliency. The bakery can be seen with the launch of VISA’s back to business project – visa.com/backtobusiness.

“Our next decade will focus on growth and advocating for reforms to help more small businesses survive these catastrophic events,” said 5th generation baker, Bobby Jucker.

The Juckers will have just returned from Washington, D.C. where they were hosted by The PEW Charitable Trusts, Flood Prepared Communities project and asked to share their perspective on flood reform plus advocated lawmakers to make changes that could help more small businesses survive these frequent natural disasters.

Additionally, Janice Jucker will be a judge at the National Small Business Week Hackathon 2019 presented by VISA and the SBA. The Hackathon’s focus centers on developing concepts that would help business owners prepare and/or recover from major natural disasters.

“Too many small businesses do not survive these natural disasters, especially low margin businesses such as food and retail establishments. Small businesses are the income stream for 50% of America; we need to make sure they survive and thrive,” said Janice Jucker.

The Three Brothers Bakery pecan pie was named “the best mail order pecan pie America has to offer” by Country Living magazine most recently in 2016, bakery owner, Bobby Jucker competed in the popular ‘Food Network Challenge’ and has been seen on Food Network’s Outrageous Food. Three Brothers Bakery won “Best Mail-Order Pies 2012” from Bon Appetit, as well as Modern Baking’s “2013 Retail Bakery of the Year” and was part of The Knot’s “2010-2013 Best of Weddings” and “Hall of Fame” picks. In 2013, the bakery won the Jeffrey Butland Family-Owned Business of the Year by the Houston division of the U.S. Small Business Administration. Three Brothers Bakery was named one of “America’s 20 Best Bakeries” by The Daily Meal in 2016 and in 2017 blue ribbon champion at the American Pie Council’s National Pie Championship for their key lime pie in that category, and in 2018, the bakery’s Pumpecapple Pie Cake was featured on BuzzFeed’s ‘Worth It’ web series.